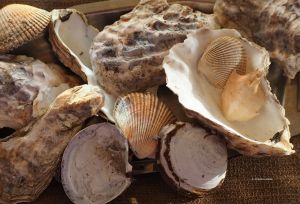 (Reuters) – U.S. shellfish producers in the Northeast and the Gulf of Mexico will be most vulnerable to an acidification of the oceans linked to climate change that makes it harder for clams and oysters to build shells, a study said on Monday.

The report said the two regions would be more at risk in coming decades than the Pacific Northwest, which had previously suffered the most from the problem, with losses to the oyster industry estimated at $110 million, putting 3,200 jobs at risk.

Carbon dioxide, emitted into the atmosphere by mankind’s burning of fossil fuels, gets absorbed by the oceans where it forms a weak acid. That undermines the ability of creatures from corals to lobsters to grow protective shells.

In the first study of acidification on shellfish producers nationwide, the scientists found that: “the most socially vulnerable communities are spread along the U.S. East Coast and Gulf of Mexico.”

The scientists – in the United States, France, Australia and the Netherlands – examined ocean acidification as well as factors including rivers, which can aggravate acidification with pollution, opportunities for shellfish workers to find new jobs if needed and local research into more resilient molluscs.

Along the East Coast, southern Massachusetts was extremely vulnerable, for instance, because of a heavy economic reliance on shellfish, they wrote in the journal Nature Climate Change.

Places including Hawaii or Florida were least likely to be affected by acidification this century, it said. Cool waters are most at risk.

Still, producers in the warm water Gulf of Mexico were at risk – partly because of dependence on a single species, the eastern oyster.

U.S. fish farmers produced oysters worth $136 million and clams worth $99 million in 2012, according to the U.S. National Oceanic and Atmospheric Administration.

Taking ocean acidification in isolation from factors like river pollution, the study said the Pacific Northwest and Alaska were “expected to be exposed soonest … now or in coming decades”.

An international study in 2013 said acidification was happening at the fastest pace in 55 million years.

Hans-Otto Poertner, an oceans expert and professor at the Alfred Wegener Institute not involved in Monday’s study, said breeding can develop varieties of shellfish resistant to acidification.

Acidification places an additional level of stress on wildlife beyond that from warmer temperatures. “Warming of the oceans itself can be a problem for many organisms,” he said.