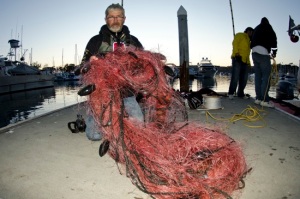 A California gray whale is moving freely after rescuers spent seven hours untangling it from a discarded fishing net. Rescuers suspect the whale had been dragging the net–which was filled with dozens of dead animals–for weeks. KNBC-TV’s Vikki Vargas reports.

The young whale was spotted Friday night off the coast of Dana Point Harbor, Calif., covered in nearly 50 feet of fishing wire. Rescue crews suspected it had been dragging the nylon netting, which was filled with dead sea animals, for nearly a week.

“We had a sea lion, we had several sharks …  the whole ecosystem, you know, was in that netting,” Dave Anderson, who works with DolphinSafari.com and was part of the weekend rescue, told NBCLosAngeles.com.

Anderson got permission from the National Marine Fisheries Services Friday evening to attach a buoy to the mammal to monitor it overnight as a team of wildlife experts assembled for a rescue attempt the following morning, The Los Angeles Times reported.

The challenge: to cut through the netting without hurting the whale, which they named “Bart” after one of the boaters who stayed with the whale overnight as it drifted up the coast, reported The LA Times.

The rescue involved seven tiring hours of sawing through the nylon as rescue crews followed the whale for mile after mile out to sea.

“It was getting very frightening towards the end of the day because we were running out of time,” Anderson told NBCLosAngeles.com. Crews were using grappling hooks and lines to reel in the mammal and a knife to cut away debris, according to The LA Times. Then, at last, a line snapped as the whale dived down, pulling buoys down with it.

When the whale came back up, he was free.