I encountered and touched my first juvenile gray whale when I visited San Ignacio Lagoon several years back.  I affectionately named the juvenile whale Skippy. While I haven’t a clue as to Skippy’s sex, for the ease of reading, I will refer to Skippy as a male.

That was in 2008.  If Skippy survived the obstacle course he must traverse twice a year, then maybe when Skippy makes his way south again, sometime this month (November), he’ll flash a fluke past my window. 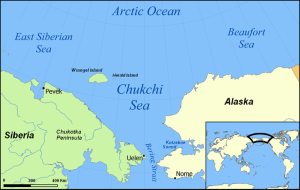 As the Arctic ices up, that’s Skippy’s cue to migrate south from his feeding grounds in the Beaufort, Chukchi or Bering Seas.  He begins a 6,000 to 7,000 mile swim to the warm waters of Baja California lagoons and the Gulf of California.

Because Skippy hasn’t reached his full size of about 52-feet, I hope whalers gave Skippy a pass in their legal hunt for 140 of the estimated 16,000 to 17,000 gray whale population. Or, if Skippy is a “stinky whale,” hunters will pass shooting a harpoon through his heart. If Skippy stinks, this means either his food source is so depleted that a necropsy would show an abundance of seaweed in his belly, or “more than a hundred volatile compounds, including hydrocarbons, sulfur and nitrogen compounds, and various odorants,” have  found their toxic way into Skippy’s tissues.  This bodes badly for longevity.

It’s possible that Skippy won’t ever reach his full size because Arctic waters grow warmer and more acidic from the burning of our fossil fuels. You see, gray whales feed on amphipod macrocephala—a shrimp-like crustacean that needs icy water to grow and survive.   This worries me because NOAA recently released its Arctic Report Card for 2010. Failing grades abound and   NOAA made this comment:  “Return to previous Arctic conditions is unlikely.”

Maybe Skippy hasn’t missed a good meal, or missed becoming a food source, so he directed his nose toward the western Pacific continental shelf and he’s on course for Destination Mexican Retreat—that is if Skippy isn’t disoriented by  military sonar tests , and his coastline migration path remains true and  he avoids shipping lanes where a ship’s strike might cause Skippy’s untimely end.

The day in 2008 when we climbed into the 18-foot panga in hopes that we’d encounter a 30-foot or longer gray whale, I ignored the tiny size of our boat and the wind-driven swells of San Ignacio Lagoon as we speedily motored

out to the World Heritage site. Our morning attempt brought us nearby whale activity, but not touchable visits. A 12-foot plume expelled by a mature female about 10-feet from our panga sent excited chills through my body.  The power, the smell, the sound, and the essence of this passing cetacean remain fervently in my psyche.  It was like she was just cruising past, checking us out, and letting us know that she knew we were there. But I won’t hurt you, her respectful distance hinted.   In camera range, another gray whale spy hopped.  I got the photo. My heart pounded so loud, that I’m sure the whale was curious about the noise and took a look about. Its eyes posed no threat, only curiosity.

I romanticized that because the gray whale is an ancient species with large brains and apparent intelligence that they sensed us and maybe had something to say.  What, I’ve only imagined-clues.

After lunch, the wind tossed white caps hard against our panga. Even if we didn’t have a very close meeting with these whales, I was satisfied with the morning excursion.  But our captain knew his waters and he knew the whales.  Suddenly several whales surrounded our panga, the captain shut off the motor, scooped water into a carved out milk carton and tossed the water back into the sea.

“There she is!” screamed another voyager as a 40-foot cow circled, expelled a plume, and grunted.  She swam under our boat, lifted it ever so gently, circled us once more, and then Skippy appeared. The 15-foot youngster swam to the side of our boat, lifted his head and looked inside. You can touch me.  We complied.

And on this very day as I recollect that sunny, wet, remarkable moment in Baja California, Skippy may soon swim past my Central California living room windows soon.

So, I’ve established the declining condition of Skippy’s summertime food sources; the potential of him harpooned and slaughtered; the possibility of man-caused chemical and pesticide contamination; sonar-induced loss of direction leading the whale into the path of oncoming ships — but, wait, more obstacles lie ahead of Skippy before he reaches Destination Mexican Retreat.

annually and add one more threat to Skippy’s longevity.

If he skips entanglement, then our garbage still threatens him. Last year, a necropsy on a near-adult gray (so it wasn’t Skippy) discovered 20 plastic bags, small towels, surgical gloves, sweat pants, plastic pieces, duct tape, and a golf ball in its stomach.

The Marine Pollution Bulletin January 2010 report stated, “Highest densities (of marine debris) occurred close to ports off central California and increased significantly over the 15-year study period. Recreational monofilament fishing line dominated this debris. Debris was less dense and more diverse off southern than central California. Plastic was the most abundant material and will likely persist for centuries.”

Unlike Jonah who visited the belly of a whale, today what scientists do find in the belly of whales include “Cables, beverage cans and bottles, tires, hub caps, and even outboard motors and 55 gallon drums.”  I hope my brief mind-meld with Skippy imparted taste for better food sources. Sadly, Skippy may not have a choice by the way he eats.

Houston, we have a problem.

Are gray whales on the decline?

Will new, increased naval training off the California,
Oregon and Washington coasts make matters worse
for the beloved migratory giants?

And how about simultaneously increased training
activities off Alaska?

Many locals made comments and were involved in the
public process over the Northwest Training Range
Complex, the offshore area where increased Navy
training has been the subject of discussion for several
years. The final plans went into effect this fall.

That plan covers the area from the Humboldt-
Mendocino County line to the Canadian border.
Although none of the increased training will happen
this far south, Mendocino Coast activists were key in
creating delays in that plan, which resulted in it being
implemented after a similar plan in Alaska, which was
started after the California to Washington plan was
supposed to be final. Increased training in the Gulf of
Alaska got under way this summer.

Based on criticism, the Navy made changes in the
lower 48 region, such as removing the use of depleted
uranium in weapons fired during the training
exercises. The Navy is increasing its training and use
of live weapons in that endeavor, off every coast, from
the northern Atlantic to Hawaii.

But nowhere has protest been louder or discussion
anything like that on the Mendocino Coast.

Now, the Navy will come to Fort Bragg on Thursday,

Dec. 16 for an “information meeting” at Town Hall
about the recently implemented NWRTC plan. Navyspokeswoman Sheila Murray confirmed a rumor that
such a meeting was planned. Final details, such as the
time of the meeting, were not available at press time.

Much of the opposition has come from the belief that
the Navy’s activities may stress and even kill migratory
gray whales, along with the dozens of other marine
mammals that live in the area. While Navy documents
claim the number of “takings” would be
inconsequential to the species, those same documents
about the NWTRC (totaling more than 2,000 pages
online) also admit much still is unknown.

The discussion of just how much impact there will be
on whales from sonar, weapons and explosives firing
during training and general combat training activities
has continued in Alaska. A lengthy filing by the N
ational Marine Fisheries Service, discussing the
impacts on whales and Navy mitigation measures, can
be found in section 64525 of the Federal Register
/Vol. 75, No. 201/Tuesday, October 19,
2010/Proposed Rules.

Gray whales migrate from the Gulf of Alaska to off the
Mexican Coast every year, passing the Mendocino
Coast twice on their journey. All of this comes at a
time when many people are questioning the notion
that the gray whale population has bounced back.

The petition is on file now at regulations.justia.com/

Comments on the petition submitted by the California
GrayWhale Coalition must to be submitted by close of
business Wednesday, Dec. 8.