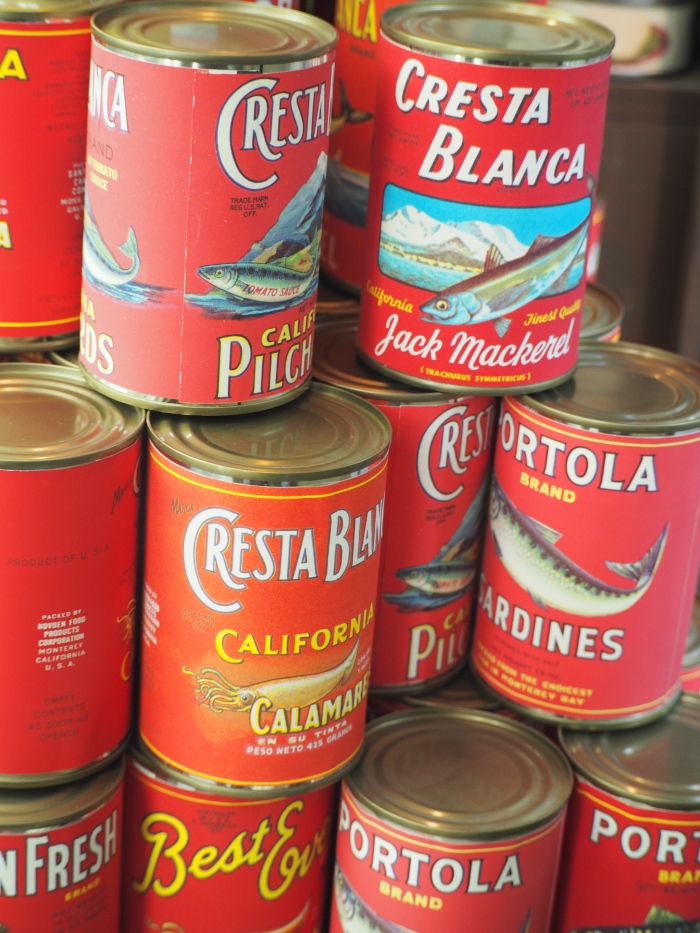 One of the most spectacular fisheries collapses in U.S. history occurred off the West Coast in the 1950s, when hundreds of boats severely overfished a Pacific sardine population already in decline from a natural down-cycle. The resulting crash decimated the largest fishery in the Western Hemisphere, closed down Monterey, California’s famed Cannery Row, and so depressed sardine populations that they did not recover for nearly 40 years.

Given that record, it’s easy to understand the recent dismay of many fisheries scientists, who have watched U.S. Pacific sardine numbers plummet as fishing has continued amid another natural Pacific sardine downturn. In April, after documenting an estimated 90 percent decline in the stock — from an estimated 1.4 million tons in 2007 to roughly 100,000 tons today — the Pacific Fishery Management Council decided to close the sardine fishery. That moratorium takes effect July 1.

The impacts are huge for the West Coast fishermen and seafood processors who have once again come to depend on sardines. In 2012, when nearly 100,000 tons of sardines were caught off the U.S. coast, this fishery was worth more than $21 million. But scientists are particularly concerned about what this means for the marine food web. Many fisheries experts, including some scientists working for the National Oceanic and ‘We’ve failed to respond quickly and that’s pushed these fish to lower levels,’ says one scientist. Atmospheric Administration (NOAA), think the fishery closure has come too late.

Sardine populations rise and fall naturally, cycling as ocean temperatures shift. But, says Tim Essington, a University of Washington professor of aquatic and fishery sciences, “Fishing makes the troughs deeper.” In a paper published in March, Essington showed that overfishing worsens the magnitude and frequency of the cyclical declines of sardines and other forage fish, such as anchovies.

“The reason I wrote the paper is that I was tired of being in rooms where people say, ‘It doesn’t matter what we do in fishing — it’s all about the environment,’” says Essington. “But we’ve failed to respond quickly and that’s pushed these fish to lower levels.”

In 2012, two federal fisheries biologists — David Demer, senior scientist at NOAA’s Southwest Fisheries Science Center and NOAA fisheries research biologist Juan Zwolinski — warned that fishing pressure on Pacific sardines was unsustainable given that cool ocean conditions were also depressing sardine numbers. They said it was “alarming” that the fishing industry was once again responding to a declining sardine population with “progressively higher exploitation rates targeting the oldest, largest, and most fecund fish.” The pair predicted an “imminent collapse” of sardine stocks.

Other NOAA fisheries scientists disagreed, and fisheries managers publicly criticized this assessment. Fishing industry representatives said management measures were responding adequately to the downturn. Officials dropped allowable catch numbers by 40 percent in 2013 and made further cuts in 2014. But under the existing management plan, sardine populations had to drop to today’s low levels before a shutdown of the fishery was triggered.

The impacts of the current Pacific sardine collapse are rippling through the marine ecosystem. Sardines, anchovies, herring, and other forage fish are enormously important to ocean ecosystems, playing a key role in moving food at the bottom of the food web to the top. Along the Pacific Coast, where they ply the waters of the California Current, from southern British Columbia to Baja California, sardines and anchovies are essential prey for Seventy percent of all sea lion pups born this year may perish because of a lack of sardines. salmon, tuna, whales, dolphins, sea turtles, and other species.

Sardines, which are exceptionally nutritious because of their high oil content, are vital to mother sea lions feeding their pups and to nesting brown pelicans. More than 70 percent of all sea lion pups born this year may perish because of a lack of sardines, NOAA scientists say. Starving pups have been seen on California’s Channel Islands, says Ben Enticknap, senior scientist and Pacific campaign manager with Oceana, a marine conservation organization.

In addition, California brown pelicans have been experiencing high rates of nesting failure and thousands have been dying. “Brown pelican have been abandoning their nests because they can’t get enough food to feed their chicks,” says Enticknap.

The Pacific sardine crash comes at a time of intense global fishing pressure on forage fish. Some are eaten fresh or canned. But huge quantities go into fishmeal for livestock and aquaculture feed. While fishmeal was once used primarily for livestock and poultry feed, it is now used mainly for aquaculture production, which has soared more than 10-fold in recent decades, from 8 million tons in 1980 to 107 million tons in 2013, according to the UN Food and Agriculture Organization. According to one study, 87 percent of the world’s forage fish — an estimated 26 million tons — are now used as food in aquaculture operations. Many scientists say this forage fish harvest is unsustainable.

Aquaculture companies say they have been making steady progress in recent years in reducing the amount of forage fish needed to produce a pound of, say, farmed salmon. Once, up to five pounds of wild fish were needed to produce a pound of salmon, but the use of vegetable proteins, algae, and other nutrients have steadily reduced that ratio in recent years.

“The number of fish that are being produced since 2011 are the lowest we’ve ever observed,” says NOAA’s Zwolinski. “No new fish are replenishing the population” he says, noting that when overall populations are small, it’s even harder for sardines to rebuild. Sardines spawn some 100 miles offshore and normally lose as many as 90 percent of their eggs, so large populations are key to fostering the next generation.

Further confounding matters is that in the past year, what’s been described as a warm “blob” — a mass of unusually warm water — has been parked in the eastern Pacific off the North American coast. The ocean in this area The larger problem is managing fisheries on an individual basis rather than an ecosystem-wide scale. is now warmer than it’s been since recordkeeping began. How and if this mass of warm water may be affecting sardines is unclear. But current conditions, says California Wetfish Producers Association executive director Diane Pleschner-Steele, “are not quite like anything we’ve seen before.”

Daniel Pauly, professor at the University of British Columbia’s Fisheries Center, notes that every fish has an optimum temperature range. Fish cannot regulate their own temperatures, so when oceans warm or cool, fish either must move to find more hospitable conditions or suffer the consequences.

Some fisheries biologists believe that in the face of evidence that Pacific sardine populations were steadily declining since 2007, a fisheries ban should have been imposed earlier. Despite the decline in sardine numbers, for example, fisheries managers allowed 100,000 tons of sardines to be caught off the U.S. West Coast in 2012.

“It stands to reason that if you lay fishing on top of various vulnerabilities to changes in conditions, you make things more vulnerable,” says Carl Safina, an ocean ecologist and president of the conservation group the Safina Center. “It takes out a certain amount of resilience.”

Conservation groups such as Oceana and the Pew Charitable Trusts are calling for more protective forage fish management. Oceana is concerned that despite the fishery closure, some 7,000 tons of sardines will be allowed to be caught as bycatch as other fish are hauled in.

Mike Okoniewski, Pacific Seafood’s Alaska operations manager and fisheries policy advisor, voiced support for the sardine closure. “You have to manage responsibly,” he said. “Without the sustainability of the resources, we don’t exist.”

With the sardine fishery closed, West Coast fishermen are shifting to other species, including anchovies and squid. But the Pacific’s anchovy populations are also now low. This is also unusual, since when sardines decline, anchovies that thrive in cooler water are typically plentiful. Off the coast of Peru, where more than half the world’s anchovies are caught, populations have declined nearly 70 percent in the past year.

Steve Marx, who directs the Pew Charitable Trusts North Pacfic and U.S. oceans program, says that a larger problem is managing fisheries on an individual basis rather than an ecosystem-wide scale. “We could sit here all day and argue about sardine management — if it’s too much, not enough.

And what’s coming down the pike is worrisome. Sardines fare better in warmer water, so theoretically they should do well as global warming heats the oceans. But it’s difficult to predict exactly how these conditions will affect ocean currents, oxygen levels, and other variables — such as the massive toxic algal bloom just detected off the U.S. West Coast — that impact marine ecosystem health. As U.S. Pacific coastal waters warm, they have been losing oxygen, which tends to reduce nutrient availability and “compress habitat,” according to David Checkley of the Scripps Institute of Oceanography. This “more than likely [will] make it a little bit tougher for sardines and perhaps exacerbate their decline,” he says.

So what’s the prognosis for Pacific sardines? Will they rebound as they have in the past? That’s the big question, particularly given climate change.

“We know the ocean is warming,” says Checkley. “When you impose natural variability on top of that, an extreme ‘natural’ event becomes even more extreme,” he says. “That’s what we’ve been seeing, and I expect we’ll see even more of that in the future.”

This article was produced in collaboration with the Food & Environment Reporting Network, a non-profit investigative journalism organization.