Santa Barbara, Calif.) –– Coastal marine ecosystems are at risk worldwide as a result of human activities, according to scientists at UC Santa Barbara who have recently published a study in the Journal of Conservation Letters. The authors have performed the first integrated analysis of all coastal areas of the world.

“Resource management and conservation in coastal waters must address a litany of impacts from human activities, from the land, such as urban runoff and other types of pollution, and from the sea,” said Benjamin S. Halpern, first author, who is based at the National Center for Ecological Analysis and Synthesis (NCEAS) at UCSB.

“One of the great challenges is to decide where and how much to allocate limited resources to tackling these problems,” he said. “Our results identify where it is absolutely imperative that land-based threats are addressed –– so-called hotspots of land-based impact –– and where these land-based sources of impact are minimal or can be ignored.”

The hottest hotspot is at the mouth of the Mississippi River, explained Halpern, with the other top 10 in Asia and the Mediterranean. “These are areas where conservation efforts will almost certainly fail if they don’t directly address what people are doing on land upstream from these locations.”

Nutrient runoff from upstream farms has caused a persistent “dead zone” in the Gulf of Mexico, where the Mississippi runs into this body of water. The dead zone is caused by an overgrowth of algae that feeds on the nutrients and takes up most of the oxygen in the water.

The authors state that they have provided the first integrated analysis for all coastal areas of the world. They surveyed four key land-based drivers of ecological change:

Halpern explained that a large portion of the world’s coastlines experience very little effect of what happens on land –– nearly half of the coastline and more than 90 percent of all coastal waters. “This is because a vast majority of the planet’s landscape drains into relatively few very large rivers, that in turn affect a small amount of coastal area,” said Halpern. “In these places with little impact from human activities on land, marine conservation can and needs to focus primarily on what is happening in the ocean. For example: fishing, climate change, invasive species, and commercial shipping.”

NCEAS is funded by the National Science Foundation (NSF). The David and Lucile Packard Foundation, the National Marine Sanctuaries, and an NSF Graduate Research Fellowship provided additional support for this research. 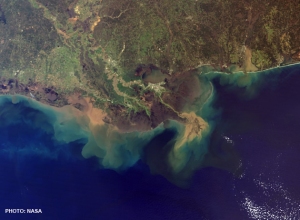 The hottest hotspot of land-based impact on marine ecosystems is the Mississippi River. The river plume is shown here as seen from space.

Categories: Rivers to the Sea