A “Ton” of Trash Removed on Coastal Cleanup Day

The waste and debris along waterways and beaches came under attack during Coastal Cleanup Day, 2018

SAN SIMEON, Ca. In four hours a sheet, a plastic milk carton, an automobile bumper, hats, flip flops, Playstation parts, even a plastic dolphin sculpture mounded into a total of 52 pounds of trash retrieved in and around San Simeon Cove/Hearst State Beach by about 27 volunteers during Coastal Cleanup Day on Saturday, Sept. 15. In all, 1, 230 volunteers removed 5, 663 pounds of trash at 36 San Luis Obispo County locations, according to the event’s sponsor EcoSlo.

I co-captained the San Simeon location and left the four-hour cleanup effort both exhausted and enthused.

At a time when our 24 hour news cycle broadcasts little joy, the enthusiasm of the volunteers who came to do nothing but pick up other people’s trash and garbage, shed a certain kind of light to blot out all the negative headlines of the day. At our locale, most volunteers were locals— some partnered with a friend or family, and some represented local groups. Visitors from Livermore and San Jose, (both cities about 200 miles north of San Simeon) also joined in the effort to keep our wastes from slipping into the Pacific Ocean.

It’s inspiring to see citizens join in an effort to keep our environment trash-free, and especially the trash left behind by others.

The blend of volunteers ranged the generations. We counted 19 adults and eight youth at our locale. Some of the youth included high school cheerleaders, the president of a high school ecology club, and youth cyclists from a bike kitchen. And literally rolling into our collection area was a senior citizen cyclist who delivered already sorted recyclable and non-recyclable trash as he made his way along Highway 1 picking up debris. Two young men pulled into the parking lot with a bag filled with beverage containers. “We found this buried under the sand around ‘Mermaid Beach,’” they explained. They also successfully wrestled with and brought up from the beach a weighty plastic bin probably used to hold fish from a fishing vessel.

The passion to halt the movement of trash to the sea was exemplified by a pair of older sisters, one of whom is in cancer treatment. They each took to cleaning trash along the roadway and found a large chunk of what we determined to possibly be plastic construction material that weighed about 18 pounds. It took the two of them summoning all their inner muscle to heave the ungainly chunk of trash up the roadside incline and to our collection site. In all, the they brought in the largest weight of trash, 23 pounds. 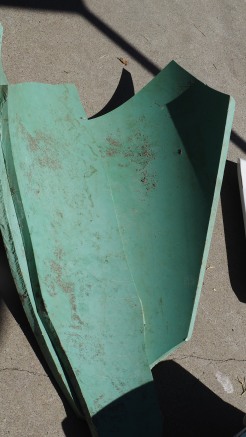 An 18 lbs. plastic find along Highway 1.

Statewide, 53,073 volunteers participated in Coastal Cleanup Day, and “…picked up 698,931 pounds of trash, and an additional 35,674 pounds of recyclable materials, for a total of 734,606 pounds or 367 tons,” according to a news release by the statewide sponsors of the event, California Coastal Commission, California State Parks Foundation, and Ocean Conservancy.

“The Coastal Commission continues to highlight the damage that trash, especially single-use disposable plastics, can cause to California’s wildlife, economy, and even human health. According to past cleanup data, 75 percent of the debris that volunteers removed was composed of plastic, a material that never completely biodegrades and has numerous harmful consequences in the environment. Plastic debris can kill wildlife, leach toxins into the environment, and even introduce them into the food chain. Since up to 80 percent of the trash on the California coast originates on land, volunteers across the state helped prevent enormous amounts of trash from ever reaching the ocean, no matter where they participated,” noted the news release.

Locally, the most significant find is what wasn’t found in overwhelming numbers — single use plastic bags. My co-captain observed, “Plastic bags were ubiquitous in the past. It’s good to see so few now.”

This cleanup effort not only showcased the value of volunteering, but also demonstrated the positive impact of limiting single-use plastics, as shown by the few plastic shopping bags recovered in the area I worked. Other single use plastics were, unfortunately, still found in large numbers, to include straws, bottle caps, cups and more. We still have work to do in regards to educating smokers that tossed cigarette butts are toxic and the single most counted debris picked up during the cleanup day.

Efforts like this help remind us that every day is cleanup day whether one lives inland or by the beach. Let’s do this!