This is a new addition to Neptune 911, where editors will post news from around the world about our seashores and oceans.

In this Current Conditions: 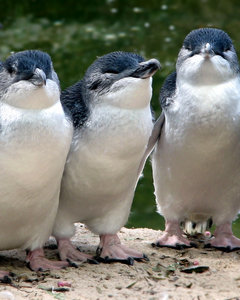 A wayward sea lion made the news recently when he showed up on a busy Oakland freeway in June. The young pup was rescued by the Marine Mammal Center, who found him to be very hungry, but otherwise unharmed.

This weekend, fully recovered and ready to go home, he was returned to the wild with five other youngsters who had also been rescued, in more usual circumstances.

Scientists are not really sure why the sea lions have strayed so far from their usual southern California waters and feeding grounds. But there’s hope that the recent “bloom” of sardines in the Monterey Bay may be providing a healthy meal or two for the visitors.

Bluefin tuna is one of our ocean’s top predators. It’s also in serious decline due to overfishing, and many scientists believe we are now at a critical point in time where failure to act could finally push this species over the edge.

So good news today, that the French president announced his country’s support for a international trade ban of this endangered species. Monaco has already called for bluefin to be listed under the Convention on International Trade in Endangered Species of Wild Fauna and Flora (CITES). This listing, if effected, would result in such a ban.

The support of France in this move is important, as historically the bluefin catch of the French fleet has been higher than other European countries, and has included catching young bluefin to be raised in floating farm pens.

Late breaking news! The U.K. government just announced it would also support the ban! All eyes turn to the Obama Administration now. Save the bluefin!

Professional snipers have been brought in to guard a vulnerable colony of penguins in Australia.

The deployment follows the mysterious deaths of nine of the flightless birds over the last two weeks. The mutilated bodies of the animals, known as fairy penguins, were found in a national park near Sydney harbour.

The main suspects are dogs and foxes. At 40cm tall, the world’s smallest penguin species is clearly no match for such aggressive enemies. To even up the fight, two snipers have been deployed as bodyguards. They have started night patrols and have instructions to do what it takes to protect these tiny creatures.

They have joined a legion of volunteers, who have also been guarding the birds during the hours of darkness when they are most vulnerable to attack.

Traps have been also been set in a concerted attempt to catch Sydney’s penguin killers.

More Reason To Pick Up Your Dog’s Poop

ScienceDaily (July 10, 2009) — Children and adults who build castles and dig in the sand at the beach are at greater risk of developing gastrointestinal diseases and diarrhea than people who only walk on the shore or swim in the surf, according to researchers from the University of North Carolina at Chapel Hill and the Environmental Protection Agency.

People who playfully bury their bodies in the sand are at even greater risk, according to the study published online recently in the American Journal of Epidemiology. It also shows children, who are more likely than adults to play with and possibly get sand in their mouths, stand the greatest chance of becoming ill after a day at the beach.

“Beach sand can contain indicators of fecal contamination, but we haven’t understood what that means for people playing in the sand,” said Chris Heaney, Ph.D., a postdoctoral epidemiology student at UNC’s Gillings School of Global Public Health and lead author of the study. “This is one of the first studies to show an association between specific sand contact activities and illnesses.”

The study is based on interviews with more than 27,000 people who visited seven freshwater and marine beaches in the agency’s National Epidemiological and Environmental Assessment of Recreational Water Study (NEEAR) between 2003 and 2005 as well as in 2007. All beaches in the study had sewage treatment plant discharges within seven miles, although the source of sand pollution was unknown and could have included urban runoff as well as wild and domestic animal contamination. Water quality at the beaches was within acceptable limits, Heaney said.

“We have known for some time that swimming in waters polluted by fecal contamination can result in illness, but few previous studies have focused on sand,” said Tim Wade, Ph.D., an EPA epidemiologist and the study’s senior author. “People should not be discouraged from enjoying sand at the beach, but should take care to use a hand sanitizer or wash their hands after playing in the sand.”

People were asked about their contact with sand on the day they visited the beach (digging in the sand or whether they were buried in it). Then, 10 to 12 days later, participants were telephoned and asked questions about any health symptoms they had experienced since the visit.

“A lot of people spend time at the beach, especially in the summer,” Heaney said. “And while we found that only a small percentage of people who played at the beach became ill later – less than 10 percent in any age group, for any amount of exposure – it’s important to look at the situation more closely. If we find evidence that shows exposure to sand really does lead to illness, then we can look for the sources of contamination and minimize it. That will make a day at the beach a little less risky.”