An hour into their journey from Tung Chung pier, the 20 members of the boat party finally got what they had been waiting for – a close encounter with the remaining pink dolphins who still make their home in Hong Kong waters. 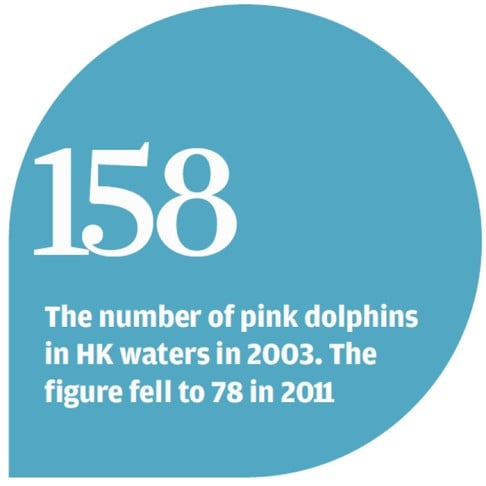 But as the boat edged closer to the dolphins in the Lung Kwu Chau Marine Park and the eager tourists reached for their cameras, their excitement quickly turned to shock and distress.

“There were about four or five dolphins in the water and it seemed at first as if they were trying to get hold of something and support it,” said Ho Tak-ching, 34, a guide with Hong Kong Dolphinwatch. “It really wasn’t normal behaviour.”

The dolphins were trying to help a mother support the body of her dead calf and stop it slipping below the water’s surface.

“I started to film and it was then that I noticed the dead baby calf. From its size and colour, I guessed it was a newborn. It was so depressing and so very sad. While I was taking the video I couldn’t stop myself crying.

“There was a group of four or five dolphins taking turns with the mother to try to keep the baby on the surface of the water. We watched it for about 30 minutes.

It was so depressing and so very sad. While I was taking the video I couldn’t stop myself crying

Grieving and unable to accept their calves’ deaths, the mother dolphins will spend up to two weeks trying to keep them on the surface of the water, exhausting themselves and going without food as other dolphins rally to help them.

These displays of epimeletic, or care-giving, behaviour demonstrate the intelligence and compassion of dolphins.

Disturbingly, they have also become an increasingly common sight in Hong Kong waters, where dolphin numbers are already in rapid decline.

The sad scene a week ago – captured on video and widely shared on Facebook – was the third separate incident of a dead calf being supported by its mother and other dolphins in Hong Kong waters last month alone.

In a scenario that paints a bleak picture for the future of the Hong Kong population, the calves are believed to have been killed by polluted water ingested by the mothers and then passed on to their offspring in their milk.

Despite being a protected species and a symbol of Hong Kong, figures to be released next month are expected to reveal a further sharp decline in the number of Indo-pacific humpback dolphins – also known as Chinese white dolphins or pink dolphins because of the change in their skin colour as they grow older.

Figures for last year are being finalised but will show a further “significant” decline, according to the experts compiling the data.

The death of the calves was almost certainly caused by pollutants in the seawater around Hong Kong, said Dolphinwatch spokeswoman Janet Walker.

“The toxins from pollutants accumulate in body fat because the dolphins can’t metabolise it and I am told dolphin milk is 40 per cent fat,” she said.

“The milk is very rich and fatty so it doesn’t disperse in the water when the mother squirts it out.

“That means all the toxins which are collected in the fat cells over 10 or 11 years of the mother living in polluted water goes straight to the first born.”

Walker described the death of three newborn dolphins in one month as “horrendous”.

She said: “There are not many things that kill babies that little. They are not as likely to get tangled in nets as they used to and I wouldn’t think the deaths were cause by a vessel collision because they stick really close to their mothers. So we think it’s toxins in the mother’s milk.

“Ideally, these dolphins should live 30 to 40 years. But here, if they get into their 20s, they are doing well. Half the dead ones every year are juveniles and babies.

“It is so frustrating. We have known about the problems facing dolphins for a long time, but no one is doing anything.

“The government claims to be doing something but then it is building this bridge to Macau and the third runway at the airport. That is an awful lot of construction in the dolphins’ habitat.” 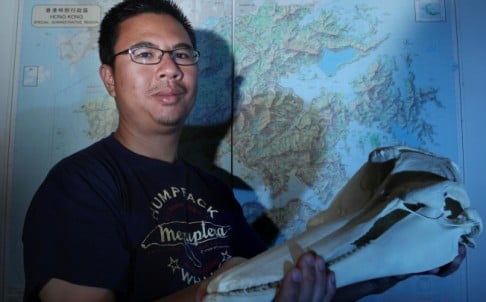 Samuel Hung Ka-yiu with the skull of a dolphin. Photo: Nora Tam

Samuel Hung Ka-yiu, chairman of the Hong Kong Dolphin Conservation Society, said he hoped the pitiful video would help people wake up to the reality that Hong Kong is on its way to losing for good the dolphin population first recorded in its waters in the 1600s.

“It is heartbreaking to watch,” he said. “You can feel for the mother. Why is she not giving up on the dolphin? It’s because she cannot accept that it has died. And why did it die? It is not the fault of the mother. It is our fault. We are causing this.

“The dolphin’s mother has to hold the baby the entire time otherwise it will sink to the bottom and she will do this for a week or two weeks, not eating at all. She is grieving.

“And what is causing that grief? It is because of us and everything we have done. I really hope people reflect on that.”

Hung, whose group has monitored and campaigned for the conservation of Hong Kong’s dolphin population since the 1990s, said: “I ‘ve never been so pessimistic about the future of our dolphins as I am now.

“I always tried to think that we could turn things around. We are able to maybe sustain the population with good conservation measures and good monitoring. But I think the pace of development pressure and the unwillingness to deal with threats like vessel traffic and the reluctance to deal with anything that hinders economic development is just too huge.”

In previous years, Hung said, his dolphin group had to deal with two or three threats at a time to dolphin habitat.

“Now we are dealing with seven or eight projects at a time,” he said. “It is crazy. There are so many battles to fight.

“We are dealing with the [Hong Kong-Macau-Zhuhai] bridge construction. We have the Airport Authority that wants 650 hectares of reclamation not only resulting in habitat loss but disrupting a travelling corridor between different areas.

“We are dealing with several reclamations within dolphin habitat that may result in 500 hectares of reclamation. … There are lots of things going on and it seems we are getting greedier and greedier.

“I just don’t know how the dolphins will be able to survive if no one listens to us. We are getting too greedy, to the point where we are so self-centred we don’t think about the harm we do to other animals.”

Asked why he believed Hong Kong’s remaining dolphins should be saved, Hung argued: “They are a bio-indicator of a healthy marine eco-system. If they are gone, our eco-food system will collapse in ways we don’t even know.

“They are also a symbol of Hong Kong. It was our mascot for the handover. What does it mean politically if we lose this mascot?”

The Hong Kong government had a stated conservation aim of ensuring dolphins continued to use Hong Kong waters,

But, citing the figures to be released next month, Hung said: “We are failing badly.

“In the past, dolphins have been able to tolerate us, but we are pushing them to the edge of the cliff and I don’t think they will ever recover.

“People just argue that if the dolphin goes somewhere else, that’s okay. They are fine, they have just gone somewhere else and they’re living happily, so they can just keep on developing.

“But it is our responsibility to protect these dolphins in our water as part of our natural heritage. 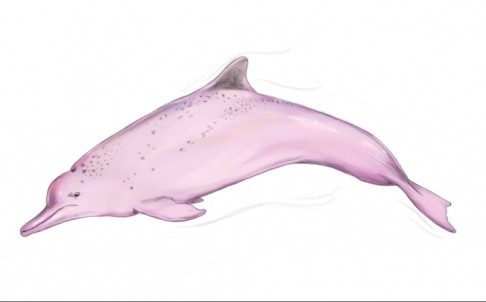 “Of course, that doesn’t mean anything to a businessman. But we will regret it if our children are not able to see dolphins again in our waters.”

The only way to save the dolphin is to change people’s mentality, he argued.

“People think that economic development is more important than anything else,” he said.

“When development clashes with conservation, people never choose to give way for conservation.

“People have a really wrong idea about animals. They think they are superior and can manipulate them.

“In Hong Kong, people just think about resources and how they can utilise them. If dolphins are in the way, they make them get out of the way.

“If we stopped the third (airport) runway, it wouldn’t mean the dolphins would come back.

“There has to be a whole change of mindset on how we treat our marine environment. It would take something monumental to change that and that isn’t going to happen.”

Hung said the population figure to be released next month would show a further “significant decline” in dolphin numbers. “The annual abundance decline is the most obvious and understandable indicator,” he said.

“It is pretty easy to see when abundance is in such decline that the dolphin is in trouble.”

A spokesman for the Agriculture, Fisheries and Conservation Department (AFCD) confirmed dolphin numbers saw a “declining trend” in the past decade.

“We are analysing the data collected last year to confirm if the declining trend continues,” the statement said.

Asked about the video circulating of the dead infant, the department responded: “[We were] aware of the dead calf [in the Dolphinwatch video], but we held that it was inappropriate to remove the calf when the other dolphins had not given up saving it. The dead calf did not turn up subsequently [so] we were unable to conduct a proper post-mortem examination or determine its cause of death.”

The statement went on: “Since 2001, the government has implemented a conservation programme for the Chinese White Dolphins in Hong Kong … comprising management, public education, research and cross-boundary co-operation to address the various human impacts threatening their survival.

“A stranding programme, run by AFCD, has been in place to investigate all marine mammal stranding cases in Hong Kong.

“When a stranding is reported, a stranding response team will attend the site to collect samples for testing, retrieve the carcass for necropsy, or rescue the live dolphin.”

For Dolphinwatch guide Ho Tak-ching, last Sunday’s experience was shattering and made her question how much longer she will continue to take parties out to sea.

“In the 10 years I have been a guide, it seems to have become harder and harder to see the dolphins,” she said.

“I really don’t want to see them disappear, but with all this development and pollution, that day may come and it may come sooner than we expect.

“Once something is lost, it is lost for ever and there will be no way to get them back.

“I think the government should be doing more to protect the dolphins, but it seems they care more about the economy than the environment.