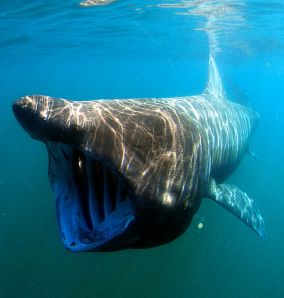 shark in Cape Cod Bay yesterday. This was the first confirmed entanglement report in the region for the year. The shark was released after a two-hour operation and appeared in relatively good condition.

The animal was reported by recreational boaters who stood by until the MAER team arrived, a few miles south of Wood End Light, Provincetown. The boaters were unsure about the species of animal involved and thought perhaps it was a small whale. The MAER team was surprised to find an 18-20 foot basking shark entangled in a buoy line. The shark had rope through its mouth and around each flipper and was slowly swimming as it dragged fishing gear at the sea floor.

The shark was able to dive deeply and showed a strong aversion to approaches by the response vessel Ibis. The team used a grappling hook and tether to add large floats to its entanglement in an effort to keep it at the surface. The team then made a series of cuts to the entanglement using a hook-shaped knife and long pole which eventually allowed the shark to unwrap itself from the entanglement.

Basking sharks are believed to be seasonal migrants to the waters of the Cape, visiting to feed on blooms of plankton. They have massive mouths and gills for filtering plankton from the water (they are essentially toothless and pose no harm to people). Basking sharks are the second largest species of fish, the largest individuals reaching nearly 40 feet.

Summer is typically a busy time for the entanglement response team, thanks in large part to the increased number of recreational boaters on the water. Mariners are urged to quickly report any entanglement sightings of whales, sea-turtles and other marine animals to the Marine Animal Entanglement Response Hotline (1-800-900-3622) or the US Coast Guard and stand by the animal at a safe distance until trained responders arrive.

CCS disentanglement work is supported by a grant from the National Marine Fisheries Service (NMFS) and the Massachusetts Division of Marine Fisheries (MA-DMF). Support for the Marine Animal Response Team also comes from grants from the Massachusetts Environmental Trust, the Pegasus Foundation, the Hermann Foundation, the Mary P. Dolciani Halloran Foundation, and contributions from CCS members. All disentanglement activities are conducted under a federal permit authorized by NOAA.

For information about the Center’s work, please visit www.coastalstudies.org