Home › Condition of Oceans › Meat, Farms, The Sea and Me

Meat, Farms, The Sea and Me 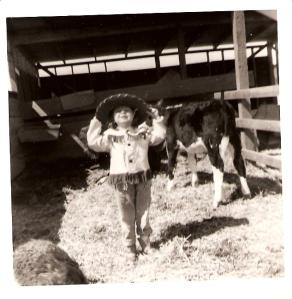 The author in the cattle barn

We lived off the “fat of the land” when I was a kid.  Well, that was a phrase my godparents, who raised me, repeated when they used the GI Bill to purchase five countryside acres.   From our ranch we raised our own meat: poultry, pork and beef. Of course we had a vegetable garden, and during the summer we visited nearby farm stands for tree-ripened fruits and other fresh produce.

We recycled the animal waste into the ground—which resulted in the biggest, sweetest and juiciest tomatoes ever.

I introduce you to my childhood because meat was always served, except for Friday.  Sunday night supper guaranteed fried chicken or a pot roast.

Sometime during my college days I sloughed off meat and learned how to mix vegetable proteins instead.  But after a health issue, which the UCLA specialist suspected a food allergy, I put meat back on the table and my health improved.

Thirty years later, meat is the least part of my diet.  Why?  It’s a choice I believe essential to both my personal  and environmental goals.

First, I don’t believe that eating meat is spiritually incorrect.  We see this in nature all the time.  And the purpose of this blog is to not debate the spiritual aspect of meat consumption vs. no-meat consumption.  But because I know that most meat that lines my supermarket’s refrigerated cases comes from factory farms where efficiency trumps everything including animal suffering—I have to decline the cheap meat.

The difference between today’s efficient factory farms from how we raised our meat is the difference between black and white.  Our steers grazed on an acre of alfalfa and grains and when it came time for slaughter, a professional butcher drove his truck near the barn and  humanely ended the animal’s life.  Our chickens had barns where they had plenty of room to bunk, while the turkeys roamed the property and visited the hog pen and barn where no more than three hogs roomed together at a time. 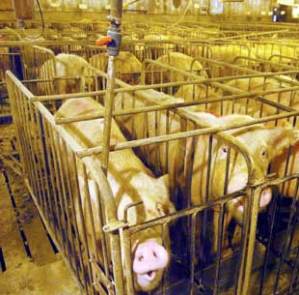 The treatment of factory farm animals is nightmarish enough, but their wastes grow into an environmental catastrophe that directly affects our seas. (For brevity, I’ll forgo the negative impact of air quality from factory farms, and the issues of feed in this piece.)

A recent Wall Street Journal report notes, “Excessive levels of nutrients such as phosphorus are producing some of the worst cases of eutrophication — runaway growth of algae and other aquatic plants — since the 1970s… Among suspected causes …runoff of livestock manure and fertilizers from large farms…Most of the dangers are showing up in the ‘nearshore zone,’ which includes the Great Lakes’ shallow waters as well as wetlands, tributaries and groundwater that feed them.”

It’s not just the Great Lakes.  Since the oceans are downhill from everything and the leaking manure (which is usually liquid because of the way the animals are fed), winds its way into creeks, rivers, bays and beaches, creating dead zones  that blankets the U.S. East Coast and the Gulf of Mexico, grows along the Pacific West Coast, and appears to wipe out parts of Europe’s Atlantic Coast, portions of the Mediterranean, and   Asia’s Pacific Coast.   Marine dead zones have also spread to Africa and South America.  This isn’t information from assumed tree-hugging sources, it comes directly from our own NASA satellite photo released in July 2010.  One can also visit an interactive map of eutrophication and hypoxia on the World Resources Institute website. 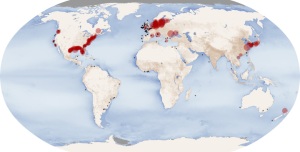 This news has about as much sex appeal as dirty sponge.  But it is news that each of us should take a closer gander because it is a trend  that “… is correlated with the significant increases in nutrients to the environment from agriculture and other human-related activities.”  And maybe more to the point, if you like crab, shrimp and other shoreline seafood, you will have to consider those choices a thing of the past, as marine dead zones continue creeping along our shorelines. 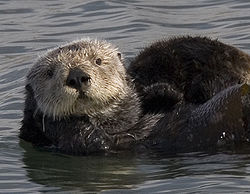 And even if you bypass seafood consumption you may want to consider the sea otter—an indicator species, or “the canary in the coal mine.” Few marine mammals generate the cute factor like the southern sea otter—a species in trouble and not recovering despite federal protection.  A recent California Dept. of Fish and Game report said,”… healthy adult sea otters are dying faster than they can be replaced.”  One of the contaminates causing premature sea otter death: wastes from factory farms upstream and the eutrophication of their habitat. 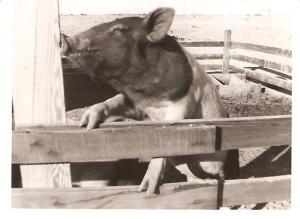 So when a Florida senator recently introduced a bill that would make photographing a farm a felony offense, I can’t help but wonder who’s buying that senator a steak dinner and why that someone would want to avoid answering the question of “where’s the beef?”  My photo albums are thick with black and white photographs of our farm, from the time my godfather brought home the weaner pigs, to the day we’d dressed a few turkeys for Thanksgiving dinner.  We had nothing to hide.

I doubt that I’ll become a vegetarian or vegan—even while those identifiers represent the bulk of my diet.  But what I do know is that my food sources will, to the best of my ability, come from sustainable operations under the direction of family farms that respect the land and the creatures who share it with us—from sea to shining sea.

Like Loading...
‹ “…Corals the Most Endangered Animal on the Planet”
Our Trash Chokes A Northern Elephant Seal ›