Home › Marine Mammals › The Many Faces of the Elephant Seal

The Many Faces of the Elephant Seal 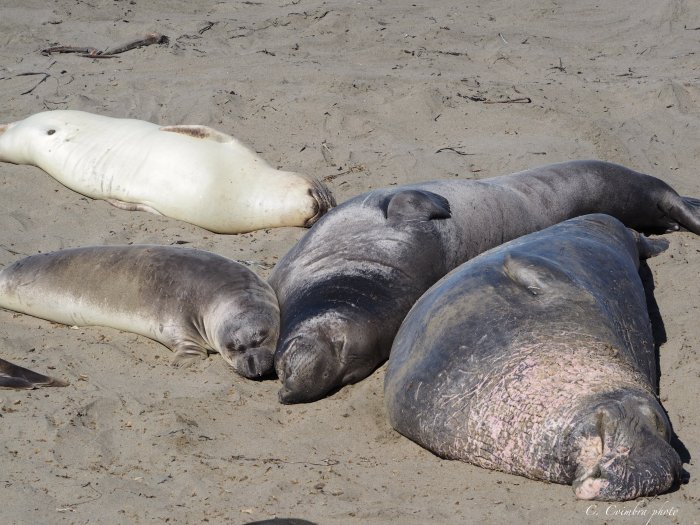 Each photo is by Charmaine Coimbra. These photos were shot with either a 300 mm or 40-150 mm lens.  Regulations and guidelines have been developed with specific recommendations and distances for viewing whales, dolphins, porpoises, seals, sea lions, sea turtles, and other marine animals. These guidelines and laws can vary by state and by species, so know the rules before you visit our coastal waters.

From the waters near the Aleutian Islands in Alaska and the north Pacific Ocean, northern elephants seals, among of the largest seals in the world, gather on the sandy beaches of Piedras Blancas near San Simeon, California.

From December through March, thousands of pups are born on the beach at Piedras Blancas Elephant Seal Rookery. January produces the most births. The mothers provide one of the richest milks for mammals. Pups typically gain about 10 pounds a day!

Pup and mother rest together 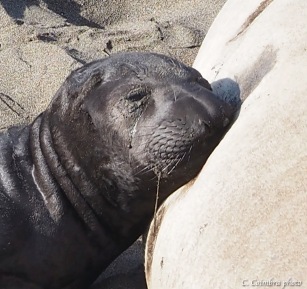 After four weeks of nursing her pup, while on an extended fast since her arrival on the beach as a pregnant elephant seal, the female must return to the sea to revitalize her body. She leaves her pup behind to fend for itself. Fortunately, most pups, now called weaners, weigh about 300 pounds and can live on their fat while they teach themselves how to swim and dive. This takes place mostly through March. Most weaners make their maiden voyage to sea during April. They won’t return to the beach until late summer/early fall.

Weaner whiskers in the water

Weaners sleep much of the time

What is this weaner singing?

It takes about seven years before a male elephant seal reaches adulthood. He will sport the long elephant-like nose, inch up to weighing about two-tons, and become the dominant force on the beach, especially during the breeding season in February.

Females reach maturity much earlier. They do not grow the long nose and look more like the pinnipeds most people are familiar with.

Both male and females make two trips to the rookery during the year:  One to simply rest and the other to birth pups and breed. Juveniles make two trips as well, but both trips are for resting and developing their skills on the beach.

Note the scarring and pink tissue on this adult male. 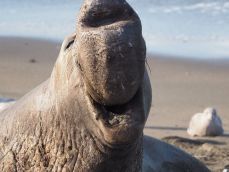 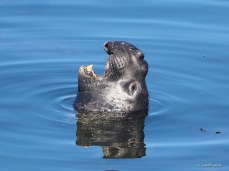 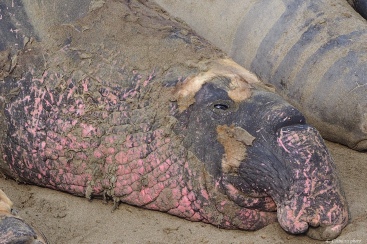 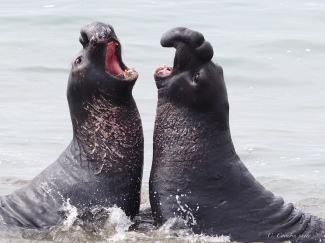