A massive marine heat wave that caused record warming of ocean waters off the West Coast five years ago, sending salmon numbers crashing and malnourished sea lions washing up on beaches across California and other Pacific states, is back, scientists said Thursday.

The ocean phenomenon, which researchers called “The Blob” when it appeared in 2014 and 2015, was caused by changes in wind patterns that limited the extent to which cold water in the deeper depths could move to the surface. Now the same thing is happening again.

The current expanse of warm water stretches from Alaska to Southern California to Hawaii. It appears similar to conditions five years ago when the original “blob” was first taking shape, federal scientists said, although so far, the warmer-than-normal waters extend down only about 150 feet below the surface, rather than 600 feet five years ago.

“It’s on a trajectory to be as strong as the prior event,” said Andrew Leising, a research scientist at NOAA Fisheries’ Southwest Fisheries Science Center in La Jolla. “Already, on its own, it is one of the most significant events that we’ve seen.”

Ocean temperatures off California and other parts of the West Coast are at least 5 degrees Fahrenheit warmer now than normal in many places. On Wednesday, the waters off the Scripps Pier near San Diego were 77 degrees, the hottest temperature recorded since 1916, and considerably hotter than the historical average of 68 degrees for early September. 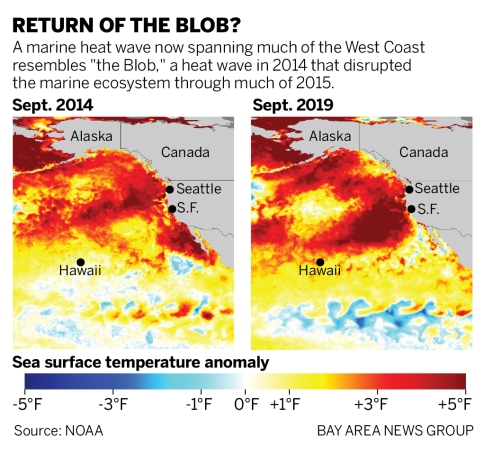 The trend began in mid-June in the Gulf of Alaska, and has spread since then.

“It’s been increasingly prominent over the past couple of months,” said Daniel Swain, a climate scientist at UCLA. “Over the past few weeks it has really expanded and intensified.”

Swain said that it’s too soon to know whether the pattern developing now increases the odds of a drought in California next year, as happened during 2014. But, he said, the warmer ocean temperatures do increase the chances of hotter weather for California this fall.

“A warm autumn has implications for other things like fire season,” he said. “A warmer fall means drier vegetation.”

Five years ago, the ocean off California’s coast warmed to up to 7 degrees Fahrenheit hotter than normal. Major changes in ocean life followed.

Normally chilly waters were more comfortable for beach goers, swimmers and surfers. Humpback whales began feeding much closer to the coast, affording people amazing views of the animals — but also putting the whales in greater danger of collisions with ships.

Huge blooms of algae emerged, shutting down crab and clam fishing for months.

Sea lions, without enough to eat, began washing up by the thousands, malnourished. Marine mammal rescue centers were overwhelmed.

After about a year, wind patterns changed and “The Blob” dissipated.

Already this year, salmon numbers are down in Alaska, Washington, Oregon and far Northern California, NOAA scientists said Thursday. Because of the major impacts, especially on the fishing industry, the scientists have begun holding meetings to track the ocean heat wave and measure it against the conditions five years ago.

“Given the magnitude of what we saw last time, we want to know if this evolves on a similar path,” said Chris Harvey, a research scientist at NOAA’s Northwest Fisheries Science Center in Seattle.

Are these marine heat waves caused by climate change?

Not exactly, scientists say. They occur when changes in atmospheric pressure stall the winds that normally blow across the ocean, and traditionally cause the upwelling of cold, nutrient-rich waters to the surface. Without that water circulation, the ocean warms near the surface.

But it’s unclear whether such ridges are caused by climate change in the first place, he noted. There is some evidence that melting Arctic ice may be connected to them, but it is too soon to say, he added.

Meanwhile, the warmer waters are occurring at the same time as when the ocean overall is warming from climate change. It has warmed about 1.8 degrees Fahrenheit over the past century.

“We don’t know if this weather pattern is related to climate change,” said Nathan Mantua, a research scientist with NOAA’s Southwest Fisheries Science Center in La Jolla. “We do know there is an underlying warming that has boosted ocean temperatures every year.”

Swain said that ocean heat waves are sort of like heat waves on land. Climate change may not cause them. But it makes them more intense.

“In a lot of ways they are similar,” he said.

—From the San Jose Mercury News

Like Loading...
‹ ‘ Arctic warming is much stronger than the global average’
Sea Otters Work for a Comeback ›