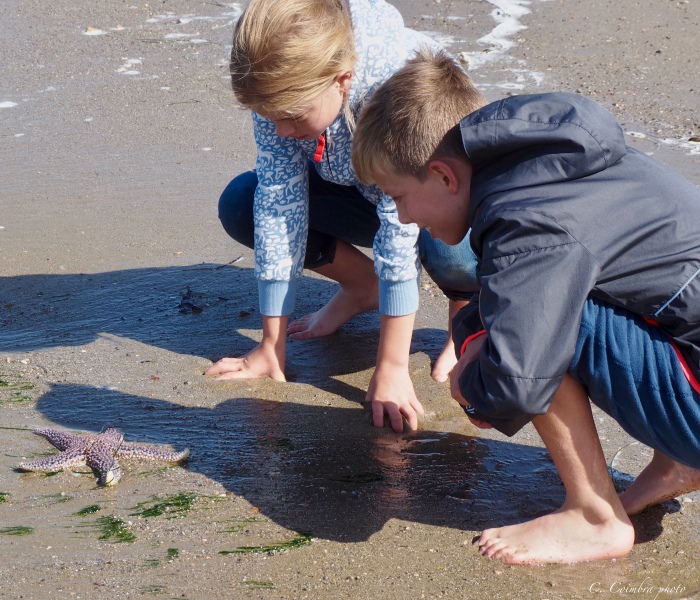 —From the New York Times

In 2013, starfish — including the morning sun star, the richly hued ochre star and the sunflower star, whose limbs can span four feet across — started dying by the millions along the Pacific Coast from Mexico to Alaska.

They were succumbing to a wasting disease. It began with white lesions on their limbs, the dissolution of the surrounding flesh, a loss of limbs and finally death. Understanding, let alone solving, the problem would take research.

One day, shortly after the epidemic began, Drew Harvell, a professor of ecology and evolutionary biology at Cornell University who had been sounding the alarm about the disease, received a curious letter.

“I received a $400 check in the mail from a group of schoolchildren from Arkansas,” Dr. Harvell said. “These kids were so upset about the idea of starfish disappearing from the oceans that they went out and they did this fund-raiser and raised 400 bucks for us to help in our research. I never asked them to do this. They just did it.”

Dr. Harvell matched it with her own money, and a donor kicked in quite a bit more. “That was what funded some of our early surveys,” she said. “These kids, who none of them had been to the Pacific Ocean, but they just needed to know those stars were there.”

One of the ultimate results of the children’s donation, a paper that sheds some light on the decline of the starfish, also known as sea stars, was published Wednesday in the journal Science Advances. The main suspect: our warming oceans.

In 2013, parts of the Pacific Ocean became unusually warm as part of a broader marine heat wave, nicknamed the Blob, that would last through 2015 and that was very likely exacerbated by human-caused global warming. But while the ocean warmed, it didn’t warm evenly, making it hard to tell if the heat wave was contributing to the starfish deaths.

In the study, which was led jointly by Cornell and the University of California, Davis, Dr. Harvell and her colleagues compiled data from citizen-scientists and the National Oceanic and Atmospheric Administration. Then, they compared changes in the sunflower star population with changes in ocean temperature during the outbreak.

While the disease affected 20 species of starfish, the researchers focused on the sunflower star because it was especially hard hit and because there was good historical data on its population before the epidemic.

The researchers found that the die-off of the sunflower star matched the pattern of heat spreading through the ocean.

According to Rebecca Vega Thurber, an associate professor of environmental microbiology at Oregon State University, who was not involved in the study, “What’s really exciting about this paper is the really strong correspondence between this temperature anomaly that occurred during that year when the sea stars started dying.”

Everywhere the warming went, the sunflower stars sickened and died.

The study showed a correlation between warming temperatures and the spread of the disease, not a direct cause. But it corroborates a hypothesis that was initially questioned because the virus that researchers think is responsible also shows up in healthy sea stars.

“That trigger, in the case of this paper, seems to be temperature,” Dr. Vega Thurber said.

Dr. Vega Thurber pointed out that the presence of a particular pathogen does not necessarily mean a disease will develop.

For example, if you’ve had chickenpox you are carrying the virus that causes shingles. Roughly a third of carriers will develop the disease, but two-thirds won’t. It takes something to prompt its emergence.

Heat has also been implicated as a trigger in the spread of a fungus that is wiping out frog and toad populations around the globe, as well as in coral diseases. In fact, when corals bleach or lose their symbiotic algae because of warming oceans, it’s typically disease that ultimately kills them.

There are things we can do to help marine life, Dr. Harvell said. We can replant seagrass beds and protect mangroves, for instance. But, ultimately, we need to stop climate change, she said. The world’s oceans have absorbed more than 90 percent of the atmospheric heat humans have caused by releasing greenhouse gases.

While some affected sea stars have begun to return to American waters on the West Coast, the sunflower star has not returned off the lower 48 states.

But last summer, on the south coast of Alaska, researchers saw a glimmer of hope: the reappearance of sunflower stars, which had disappeared from Prince William Sound during the outbreak.

“We don’t know where exactly they came from,” said Brenda Konar, a professor of marine biology at the University of Alaska, Fairbanks, who was not involved in the Science Advances study. “They were pretty small and we don’t know if they’re going to survive. So we’re really curious about what we’ll see next summer.”

If they make a comeback, the Arkansas students, who are now teenagers, will likely be delighted.