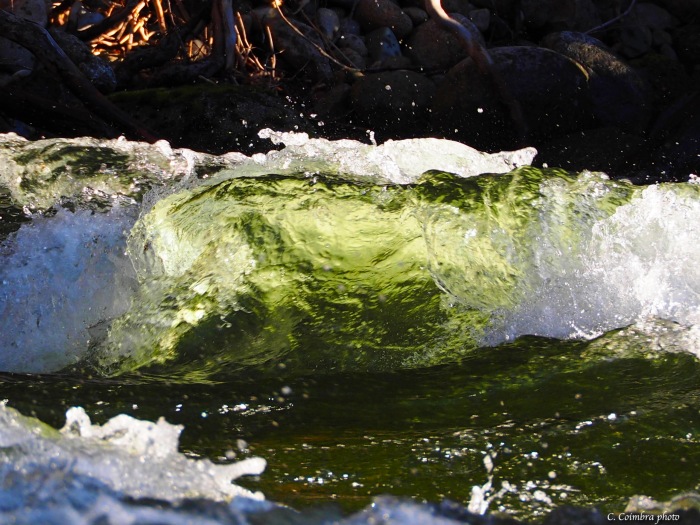 Blooms of harmful algae in the nation’s waters appear to be occurring much more frequently than in the past, increasing suspicions that the warming climate may be exacerbating the problem.

The study comes as scientists have predicted proliferation of these blooms as the climate changes, and amid increasing attention by the news media and local politicians to the worst cases.

Just as troubling, these blooms could not only worsen with climate change, but also contribute significantly to greenhouse gas emissions.

EWG based its study on news reports and before-and-after satellite images that show the expansion of the blooms. Though the rapid increase in the annual numbers might reflect more thorough observations and reporting in recent years, Craig Cox, who focuses on agriculture for EWG, said the numbers may still be on the low side.

In 2014, the news was especially urgent in Toledo, where a toxic algal bloom in Lake Erie forced health officials to declare the water unsafe for drinking and bathing. Harmful algae blooms had been common in the western part of Lake Erie from the 1960s through the 1980s, but they had diminished with better pollution controls—until about a decade ago, according to NOAA.

Now the blooms—thick undulating mats of green—have become an annual occurrence there.

Farm Runoff and the Pushback on Solutions

The root cause of the problem lies mainly in agricultural runoff that contains phosphorus, which encourages algal growth.

At a recent conference, the mayor of Toledo pointed the blame for the continuing problem squarely at the Ohio Farm Bureau Federation, saying that lawmakers in the state were too intimidated by the group to support legislation to deal with the problem. “It’s probably the most powerful interest group in Ohio,” Mayor Wade Kapszukiewicz said in an interview.

Kapszukiewicz noted that the city spent billions of dollars upgrading its water treatment facility more than a decade ago and that there have been no sewage overflows into the lake since then, and yet the blooms are getting worse. “Toledoans are paying for a problem we didn’t create,” he said.

“Nutrient runoff” comes from sewage and other sources, but mostly from fertilizer and manure, which are especially high in phosphorus.

The agricultural industry in Ohio and elsewhere has long been aware of the problem. Joe Cornely, a spokesman for the Ohio Farm Bureau, said the bureau had been looking into it for years. But when it came to legislative and regulatory measures, Cornely said: “You’ve heard the old saying, ‘You can have it fast or right.’ We want it to be right.”

Critics see that as foot-dragging from the industry. In March, after the administration of Ohio Gov. John Kasich proposed labeling fertilizer an agricultural pollutant, the Farm Bureau balked.

The proposal came after the Ohio Environmental Protection Agency declared, in a draft report that has not yet been finalized, that the open waters of western Lake Erie were impaired, a designation long sought by environmental groups. The impairment designation, the groups hope, will lead to a threshold—a “total maximum daily load,” or TMDL—that sets a cap on overall phosphorus loading into the lake.

“We can use it to hold EPA’s feet to the fire,” said Madeline Fleisher, a senior attorney with the Environmental Law and Policy Center.

‘Shooting Methane and CO2 into the Atmosphere’

Meanwhile, researchers have found evidence that algal blooms are not just consequences of climate change, but are also sources of climate-warming emissions.

In a study released in March, researchers affiliated with the University of Minnesota, Minnesota Sea Grant and the U.S. Environmental Protection Agency found that, globally, lakes and manmade “impoundments” like reservoirs emit about one-fifth the amount of greenhouse gases emitted by the burning of fossil fuels. The majority of that atmospheric effect comes from methane, an especially potent short-lived climate pollutant.

“We found that, as the lakes go greener, more eutrophic, the atmospheric effect of the lakes skyrockets,” said John Downing, the paper’s lead researcher and director of the Minnesota Sea Grant. “That’s because plants are decomposing and shooting methane and CO2 into the atmosphere.”

Your donation powers our nonprofit newsroom

Support a more-informed community on climate

Downing and his colleagues also found that even small increases in harmful algal blooms could impact the atmosphere. “Basically a little increase [in algal blooms] could cause the greenhouse effect of lakes to increase 5 to 40 percent,” Downing said.

Since the study was published, Downing and his colleagues have continued looking into changes in Lake Erie, which Downing called “one of the poster children for algal blooms.”

“The atmospheric impact of those gases coming out of Lake Erie right now is probably 18 times the atmospheric effects of all the cars in the city of Detroit,” Downing said.

“If we take Lake Erie and change it, and make it as green as the part around Toledo, then the carbon emissions from the lake increases two-and-a-half more times and the atmospheric impact is equivalent to adding another seven million cars on the road,” he said.

“People are concerned that [algal blooms] stink and they hurt their pets,” Downing said. “But there’s another reason to not have your lakes ruined: They can change the climate in a significant way.”

–From Inside Climate News