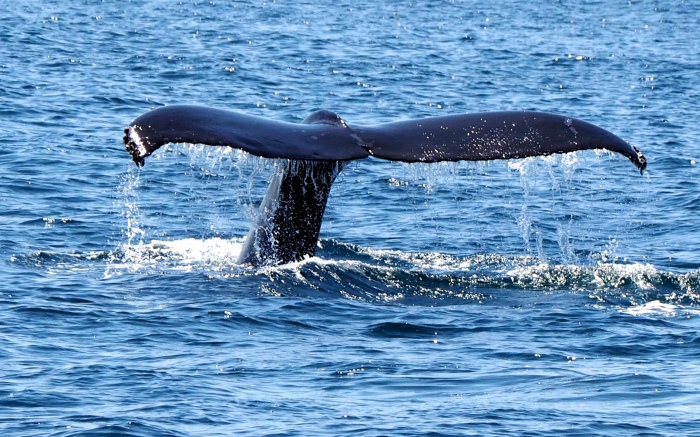 Since January 2016, elevated humpback whale mortalities have occurred along the Atlantic coast from Maine through North Carolina. A table of stranding numbers by state is below.

This event has been declared an Unusual Mortality Event (UME).

Partial or full necropsy examinations were conducted on approximately half of the whales. Of the 20 whales examined, 10 had evidence of blunt force trauma or pre-mortem propeller wounds indicative of vessel strike.

The most important step members of the public can take to assist investigators is to immediately report any sightings of live whales in distress or stranded, or dead whales. Make the report by calling the Greater Atlantic Marine Mammal Stranding Hotline at 866-755-6622, the Southeast Marine Mammal Stranding Hotline at 877-433-8299 or contact the U.S. Coast Guard on VHF Channel 16. Again, do not approach or touch the whale.

Why are whales stranding?
A portion of the whales have shown evidence of pre-mortem vessel strike; however, this finding is not consistent across all of the whales examined so more research is needed.

As part of the UME investigation process, an independent team of scientists (Investigative Team) is being assembled to coordinate with the Working Group on Marine Mammal Unusual Mortality Events to review the data collected, sample future whales that strand and to determine the next steps for the investigation.

Click this link for detailed information:  FAQs on Whale Strandings 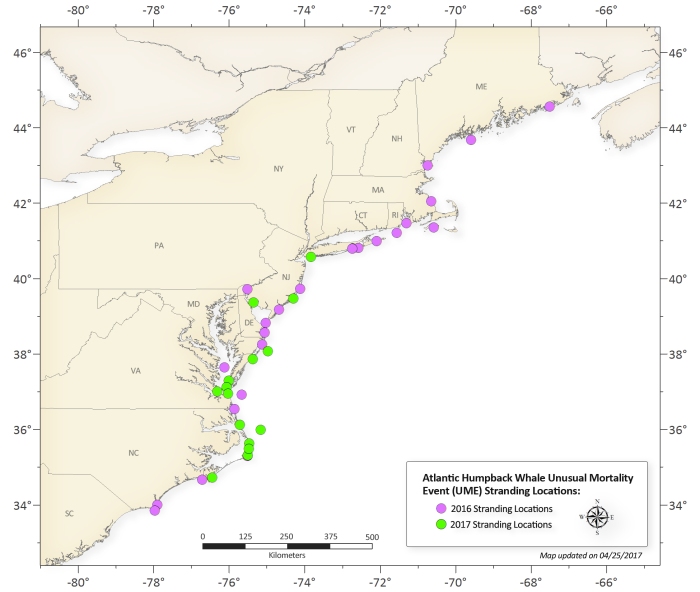 The News Journal reports that the National Oceanic and Atmospheric Administration Marine Fisheries declared it an “unusual mortality event,” which is called when higher-than-normal numbers of marine mammals die for unknown reasons. An agency spokeswoman says details will be provided Thursday.

Marine Education, Research and Rehabilitation Institute Executive Director Suzanne Thurman says a decomposing whale washed into shallow water in the Delaware Bay recently, but weather is hampering efforts to study it. Thurman says it apparently was a juvenile humpback.

If confirmed, it would be the fourth stranded in Delaware waters in a year, an unusually high number.

Four have stranded off Virginia and there was a stranding last fall off Long Island.

On January 15, 2016, a dead humpback whale was spotted floating off the coast of Virginia Beach. Then Virginia played host to two more stranded humpbacks.
In the waters and beaches of New York, people reported four dead humpback whales, and in North Carolina, the sad total reached five. Rhode Island, New Jersey, and Maine each reported two deaths of the same species. Maryland and New Hampshire each found one. Delaware and Massachusetts found three each. By any account, 2016 was a terrible year to be a humpback whale on the east coast of the United States.

The new year is no better. So far, 15 additional dead humpback whales have shown up along the east coast, bringing the total to 41. The high number led the National Oceanic and Atmospheric Administration (NOAA) to open an investigation into what is now officially classified as an unusual mortality event.

NOAA is now investigating why so many humpback whales are dying in this particular area. They’re doing necroscopies—animal autopsies—on whale carcasses that aren’t too badly decomposed, collecting environmental and population data, and generally trying to figure out why this keeps happening.

Just under half of those events remain biological cold cases, with cause(s) of death still uncertain.