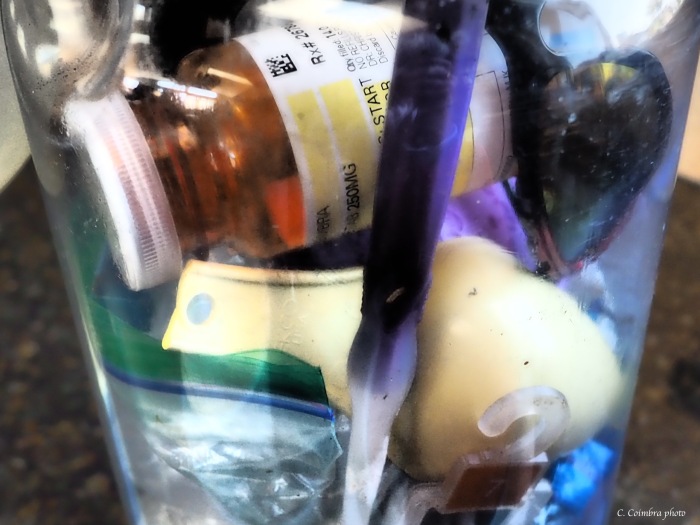 Hundreds of tonnes of plastic are cluttering the once pristine Arctic Ocean and doing great damage to the planet, a new report has found.

On top of the danger of fish and other wildlife swallowing the plastic, the material contains toxic chemicals that leak into the ocean. These toxins can attract other chemicals in the water to create concentrated hot spots of deadly waste.

‘The total load of floating plastic for the ice-free waters of the Arctic Ocean was estimated to range from around 100 to 1200 tons, with 400 tons composed of an estimated 300 billion plastic items as a mid-range estimate,’ the authors wrote in their study.

‘The fragmentation and typology of the plastic suggested an abundant presence of aged debris that originated from distant sources.’

The researchers claims that the Arctic is a ‘dead end’ for floating plastic waste dumped in the Atlantic Ocean off Europe and the United States.

This waste is swept north by ocean currents to a ‘polar graveyard’, they said.

Levels of plastic found east of Greenland and in the Barents Sea off Norway and Russia were far higher than expected for the sparsely populated regions.

Abstract  from The Arctic Ocean as a dead end for floating plastics in the North Atlantic branch of the Thermohaline Circulation
The subtropical ocean gyres are recognized as great marine accummulation zones of floating plastic debris; however, the possibility of plastic accumulation at polar latitudes has been overlooked because of the lack of nearby pollution sources. In the present study, the Arctic Ocean was extensively sampled for floating plastic debris from the Tara Oceans circumpolar expedition. Although plastic debris was scarce or absent in most of the Arctic waters, it reached high concentrations (hundreds of thousands of pieces per square kilometer) in the northernmost and easternmost areas of the Greenland and Barents seas. The fragmentation and typology of the plastic suggested an abundant presence of aged debris that originated from distant sources. This hypothesis was corroborated by the relatively high ratios of marine surface plastic to local pollution sources. Surface circulation models and field data showed that the poleward branch of the Thermohaline Circulation transfers floating debris from the North Atlantic to the Greenland and Barents seas, which would be a dead end for this plastic conveyor belt. Given the limited surface transport of the plastic that accumulated here and the mechanisms acting for the downward transport, the seafloor beneath this Arctic sector is hypothesized as an important sink of plastic debris.

The report revealed how man-made pollution extends even to remote parts of the globe.

‘The northeastern Atlantic sector of the Arctic Ocean appeared as a dead end for the surface transport of plastic pollution,’ the authors wrote.

The survey, by the 2013 Tara Oceans circumpolar expedition that sampled 42 Arctic sites with nets, found hundreds of thousands of mostly tiny bits of plastic per square kilometre (square mile) in the northeastern Atlantic region.

Much of the plastic was apparently old and had floated north from Europe and North America.

Levels were comparable to those in ocean gyres, vast swirling currents nearer the equator, where plastic debris is known to accumulate, they wrote.

‘Ninety-nine percent of the floating plastic in the Arctic was confined in the Greenland and Barents Seas,’ lead author Andres Cozar of the University of Cadiz in Spain said.

‘The plastic pollution in the rest of the Arctic Polar Circle was low or absent,’ he said.
Global warming could open the Arctic to more pollution, partly as the extent of sea ice shrinks.

‘High loads of marine plastic pollution may become prevalent in the Arctic in the future,’ the study said.

The study said there was ‘special concern’ about the impact of plastic on fragile Arctic wildlife, including on the seabed where bits may eventually sink.

Northern fulmar birds on the Arctic Svalbard islands north of Norway, for instance, have been found with high levels of plastic in their stomachs from discarded plastic bags, fishing nets and other trash.

Separately, the Arctic Monitoring and Assessment Program (AMAP), which was not involved in the report, is examining wider pollution risks from plastics.

‘We’re looking to see how big the problem is for the Arctic – both the physical plastic and the chemicals attached to the surface,’ Lars-Otto Reiersen, executive secretary of AMAP, said.
Read more: http://www.dailymail.co.uk/sciencetech/article-4426104/Arctic-seas-called-dead-end-plastic-floating-U-S-Europe.html#ixzz4eoB6gNAO
Follow us: @MailOnline on Twitter | DailyMail on Facebook