Sylvia Earle Urges a Rethink on Fish as Food 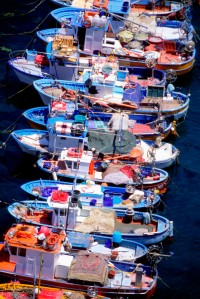 very interesting challenge to the audience. “I ask you to go to the tanks here and get to know the fishes’ faces. No two are alike. They have individual looks and behaviors. They are important creatures in their own right,” she said, “Look at the look on the face of a child when they come here to the Aquarium and see fish face-to-face. Go. See a fish face-to-face, swimming in something other than lemon slices and butter.”

While The Maritime Aquarium and other like institutions are places for kids and families to have fun and learn, they also offer an opportunity for people to “see what I see, without getting wet or needing specialized equipment,” Earle said.

Humans have developed affinities for sea-dwelling mammals, whales and dolphins, she explained, “We still have a long way to go when it comes to fish.” However, Earle also noted that, despite most people’s professed love for whales and dolphins, such countries as Norway, Iceland, Japan and a few others “are still munching on whales.”

Sharks and tuna fare far worse. “Ninety percent of the fish we are used to munching on are gone, most in the past 50 years,” she said. “We think of sharks as being predators. But humans are the top predators. ‘Deadliest Catch?’ Well it is for the crabs,” Dr Earle sardonically noted.

Hundreds of millions of sharks have been killed in recent years to satisfy a luxury taste for sharks and shark fin soup, she said.

On Jan. 6, a bluefin tuna sold for $1.8 million. “For one fish,” Dr. Earle exclaimed, “and a juvenile at that.” The fish weighed 489 pounds. “They used to be caught at 1,500 pounds,” she said. “One tuna will not feed many people, only a luxury taste for a few.” Dr. Earle said scientists estimate that perhaps 96 percent of bluefin tuna are gone from the oceans. She wondered how much will someone pay for the very last tuna?

Bluefin tuna can live 30 years or more. They take three to five years to reach sexual maturity. One of the oceans most voracious and powerful predators, at maturity they have few natural enemies. They also have to eat thousands of pounds of fish to grow so big.

Fishing limits and international committees try to impose catch limits, Earle said. But she noted that 64 percent of the world’s oceans lie beyond national jurisdiction, each country claiming a 200-mile territorial limit. More than 70 countries fish for tuna. Japan is the largest consumer, taking 36 percent of the catch annually. The United States is a close second, consuming 31 percent.

“By the middle of this century, commercial fishing will cease to exist because the fish will be gone,” she predicted. “The large, industrial factory ships are killing the oceans. Fish don’t have a chance. We use all the weapons of war: sonar, radar. There is no place fish can hide. We should look at these companies going all the way down to take Arctic krill. As taxpayers, we are subsidizing the extinction of wildlife in the sea.”

“Fish are free. We don’t pay for fish. We just pay to go get them,” she said.

“As prolific as these beautiful creatures are, they just can’t keep up with our ability to hunt and catch them,” she said. “In fact, humans’ abilities to fish, and declining stocks of popular fish, have led to new ways to catch fish previously too deep or less desirable and bring them to market.”

Dr. Earle related to The Maritime Aquarium audience an appearance on “The Colbert Report” when she “outed” differences between marine biologists’ common names for some edible species and their marketing monikers. Slimehead fish are now sold as orange roughy. Hoki fish, being presented as an ethical alternative to cod, is a deep-sea fish known to biologists as rattail. And the famous Chilean sea bass is truly a Patagonian toothfish. Stephen Colbert suggested that perhaps if we called earthworms “Appalachian yard trout” that people may start eating them too.

Fish are not like chicken that we eat after they’re a few months old. “We need to get people thinking about what it takes to make a fish,” she said.

The average time to raise a broiler chick to market is 48 days, according to Kentucky College of Agriculture. “That orange roughy on your plate could be a century old,” Dr. Earle said. “Even a lobster takes five years to grow to maturity.”

“It takes tens of thousands of plants at the bottom of a long and twisted food chain to make a tuna or shark,” she added. Chickens are one of the most efficient food animals, converting every 2.5 pounds of feed into a pound of chicken in a relatively simple food chain. A tuna needs to eat 15 pounds of live fish to gain one pound of weight. Meanwhile, farmers are buying ground-up fish meal as a cheap source of protein to feed their chickens, Earle said, instead of feeding the chickens soybeans or other plants that can be grown and replaced year after year.

“Approach that fish on your plate with great respect,” Dr. Earle said. “Understand its story.” She suggested we think about that fish – what it did, how it lived, how long it lived and what it ate – to get to our plate.

Still Dr. Earle finds hope for our oceans. “We are the only species on the planet that has the power of learning,” she said. “It starts with being aware. We have to change our ways. We still have time. I hope that maybe we can figure things out in time.”

What can you do? You can start by eating sustainable seafood. Some fish can be raised in environmentally friendly ways and fed primarily plants, instead of other fish. Carp are actually more efficient than chickens in feed conversion – 1.5 pounds of food for each pound of live weight, according to University of Kentucky. The Maritime Aquarium’s “Go Fish!” exhibit displays some popular food and game fish and offers advice on sustainable seafood, including a wallet card you can use to make informed purchases at markets and restaurants.

When Dr. Earle suggested to Colbert that people should consider consuming less fish or stop eating them altogether, the host quipped, “But where will I get my mercury?”

Dr. Sylvia Earle appeared as part of The Maritime Aquarium’s “Global Insights” series of lectures and presentations.  The series continues May 20 with a talk by Jean-Michel Cousteau.