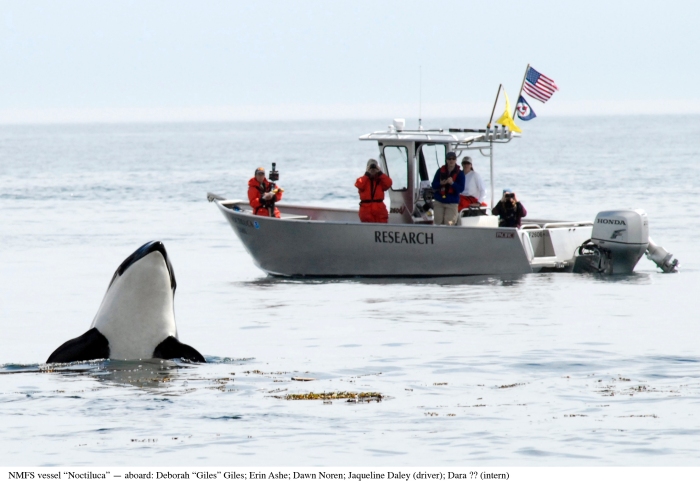 I have some bleak news to share about our Southern Resident killer whales, which normally frequent Puget Sound at this time of year.

“Things are shaping up to be pretty bad,” said Ken Balcomb of the Center for Whale Research, who keeps tabs on the orca population. “J-28 is looking super-gaunt, and I would say she is within days of her death.”

The saddest part of my conversation with Ken this morning was to hear him say that Polaris’ 7-month-old calf would become an orphan and probably will not survive without his mother. That’s the typical outcome for an orphan of that age, Ken said, although there is a chance that the young male will be adopted by his grandmother.

The calf, J-54, is still nursing, but he is close to weaning, Ken noted. He is the newest calf born into the three Southern Resident pods and is part of the “baby boom” of nine orcas born between December 2014 and December 2015. So far, only one of those calves, J-55, has died.

After my conversation with Ken, the Center for Whale Research posted a news release about the death of Samish. Orca observers on the water have known that she was missing for some time now.

As of today, J pod was on its way out through the Strait of Juan de Fuca, no doubt searching for food. The chinook salmon run has been very low this summer.

“Historically, at this time of year, we would see nice little bunches (of orcas) swimming back and forth in front of the house,” said Ken, who lives on the west side of San Juan Island. But this year, the whales have broken up into small family groups and are traveling around in seemingly random patterns, presumably in search of whatever salmon they can find.

“Even the fishermen aren’t getting much this year,” Ken said.

To gauge a killer whale’s condition, researchers consider the overall shape of its body. Without adequate fish — primarily chinook salmon — an orca grows thinner as the body fat declines. As conditions grow worse, a depression develops behind the blow hole. This sunken condition — which Polaris has developed — is called “peanut head.” So far, none of the other animals have been observed in such a dire condition.

I’ve often been told by medical experts that when a killer whale loses weight it can be a sign of a major problem, such as a disease that makes them incapable of hunting to their normal ability. But a shortage of food can exacerbate the condition.

“We have been telling the government for years that salmon recovery is essential for whale recovery,” Ken said.

He blames the salmon decline on longtime mismanagement of wild salmon stocks — including damage to habitat, over-fishing and excess hatchery stocks in both Canada and the U.S. One of the quickest ways to increase the chinook population for these whales is to take out the Snake River dams, he said.

Rebuilding salmon runs on the Elwha River will help, Ken said, but the number of fish is small compared to the potential of the Snake River, which flows into the Columbia and produces salmon that can be caught in the ocean.

“I’m trying to get the marine mammal people to talk to the salmon people,” Ken said. “Fish have been a political problem for a long time, and we are not solving the salmon issue.”

Money spent on law enforcement to make sure whale watchers don’t get too close to the orcas would be better spent on education — specifically on educating lawmakers about the needs of salmon and killer whales, he quipped.

As of July 1 — the date of the annual orca census — the population of the three Southern Resident pods stood at 83. That’s the number that will be reported to the federal government. Since then, Samish has gone missing, so the ongoing count falls to 82, pending the status of Polaris and her son.

Polaris is the first offspring of Princess Angeline (J-17), who is still living. Her first offspring, a female named Star (J-46), is now 7 years old. J-54 is her second offspring.