Home › Engangered Marine Species › Mexico’s Plan to Save the Vaquita

Mexico’s Plan to Save the Vaquita

MEXICO CITY — President Enrique Peña Nieto and his top military commanders flew to a modest fishing village in Mexico’s far northwest on Thursday and made a promise to protect a small porpoise called the vaquita that is on the edge of extinction.

Standing near the dock where the fishermen of the village, San Felipe, unload their catches of shrimp, corvina and sierra, Mr. Peña Nieto ordered the Mexican Navy to take charge of the effort to halt the illegal fishing that has reduced the number of vaquitas to fewer than 100.

The navy patrols — aided by two powerful new boats, along with light aircraft and drones — are part of a broad plan to save the elusive vaquita, the world’s smallest porpoise, which inhabits the northern reaches of the Gulf of California. The vaquita population has been declining for decades; they are vulnerable to the long, curtainlike gillnets set by local fishermen, which accidentally ensnare and kill them.

But the risk that the vaquita could disappear altogether has risen sharply in the past few years, driven by demand for another kind of fish.

The swim bladder of the totoaba, an endangered fish that is similar in size to the vaquita, is a delicacy in China. Over the past few years, local organized crime gangs have begun paying fishermen thousands of dollars to catch totoaba. As this illegal fishing soars, more vaquitas are dying in the gillnets set for totoaba.

Last month, the Mexican government announced that it would ban gillnets across 5,000 square miles of the upper Gulf of California for two years and compensating the fishermen. The two years will buy time while experts and local fishermen develop nets that are safe for vaquitas.

But conservationists, who welcomed the government’s plan, warn that the measures will fail without enforcement against totoaba fishing. Mexico’s poorly equipped environmental authorities have been no match for the fast boats and weapons guarding the totoaba trade.

Omar Vidal, the director of the World Wildlife Fund in Mexico, said the navy’s involvement was essential to making the plan work. 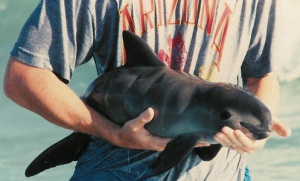 “I think this is our last opportunity,” Mr. Vidal said by telephone from San Felipe. “I have been studying the vaquita for half my life. I have worked with six different federal administrations. All of them have done something, but it has not been enough.”

Other measures are still needed. The totoaba bladders are smuggled across the border to California and then shipped to China, and Mr. Vidal said the American and Chinese governments needed to crack down on the illegal trade.

Marketing vaquita-safe shrimp to environmentally conscious consumers is the next part of the equation, he said, arguing that if consumers are willing to pay a premium for shrimp caught without risk to the vaquita, fishermen will be encouraged to adopt vaquita-safe nets.

–From the New York Times