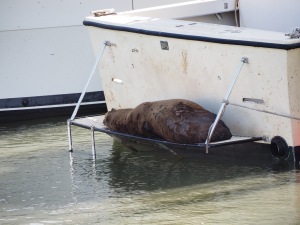 MORRO BAY, Calif. – Packed with large nets, wooden boards and a large crate, a dark blue truck scoured the edges of surfer-lined Pismo Beach late one morning earlier this month. Onlookers in the distance tipped them off to what they were searching for.

The truck came to a halt and the rest of DeRango’s crew suited up for the rescue – wooden boards in hand, two crew members crowded around a disoriented sea lion convulsing on the edge of the water while DeRango threw a net over it. The fourth crew member injected the sea lion with an anti-seizure medication before herding the animal into a large crate and loading it on the bed of the truck.

Concerned onlookers asked what happened to the sea lion as they took turns peering into the back of the truck. Heavy breaths and sounds of suffering bellowed from the cage.

DeRango explained that the rescue center got a call about a sea lion having repeated seizures on the beach and that they were taking the animal back to their rehabilitation center.

Peppa, the name given to the rescued sea lion, is like many of the animals crowding the six pens at the rescue center, which has brought in as many as 20 seizing sea lions a day in the San Luis Obispo area since June. Earlier this spring, its partner rescue center in Monterey experienced a similar boom. Of those rescued at both sites, half succumb to the seizures within days.

The culprit? Domoic acid, a deadly neurotoxin produced by algae, that appeared at record high levels along California’s Central Coast this spring and summer, closing fisheries and taking the lives of many marine mammals. But toxic algae isn’t just limited to California– this summer various toxic blooms have poisoned coastlines across America, including Lake Erie and the Gulf of Mexico.

The genesis of domoic acid

While the algae in Monterey, produced by the Pseudo-nitzschia genus of phytoplankton, are a common occurrence along the Atlantic and Pacific coastlines and around the world, its production of domoic acid is not.

First discovered in 1987 when 107 people on Prince Edward Island fell ill after eating mussels harboring domoic acid, the algae occasionally produce this deadly toxin, which scientists believe is triggered by changing ocean conditions and surges of nitrogen into bodies of water.

Once produced by the algae, domoic acid quickly works its way up the food chain, first gobbled up by shellfish and plankton-eating fish, like sardines and anchovies, that harbor the toxin in their guts. Next in line are sea lions, brown pelicans, otters, whales and dolphins, all of which have been stranding in large numbers recently, or, in the case of pelicans, literally dropping dead out of the sky.

But domoic acid also poses a grave risk to humans, which is why the California Department of Public Health closed certain fisheries up the coast in Monterey and Santa Cruz counties in April after high levels of the acid were reported by a team of marine scientists at University of California, Santa Cruz, that has been monitoring domoic acid for 14 years.

“The danger lies in the accumulation,” said Clarissa Anderson, one of the marine scientists in Santa Cruz tracking the growth of domoic acid events. “It’s not horribly toxic unless it accumulates at high levels.”

But Anderson says that concentrations reached dangerously high levels this spring all over the California coast, particularly in Monterey.

Monterey is the top agricultural area along the Central Coast as well as home to a suite of premier golf courses. It’s also been subject to a large coastal population boom, meaning more septic tanks and more lawns being fertilized. Combined, says Anderson, these activities result in more nitrogen running off into the Bay, altering the marine environment in a way that can lead to higher domoic acid concentrations.

Seasonal upwellings of ocean waters flush the Bay with nutrients, which could naturally trigger the algae to produce these blooms. But those upwellings usually diminish quickly, as do the nutrients that feed toxic blooms. However, constant pulses of nutrients coming from human activities, mostly from fertilizer application, allow the toxic blooms to persist.

Nationwide, agriculture is the top source of nitrogen added to water resources, and California is no different. The amount of nitrogen contained in fertilizer sold in California has increased by 800 percent since the 1940s, contributing to the hefty 800,000 tons of nitrogen used as fertilizer every year.

Up and down the coast

Even further up the coast, north of San Francisco, the aftermath of this rising nitrogen use has been unfolding at The Marine Mammal Center headquarters in Sausalito.

“These blooms are getting more frequent and larger every year and affecting more and more animals,” said Shawn Johnson, director of veterinary science at The Marine Mammal Center.

As the largest marine mammal hospital in the world, the Marine Mammal Center receives hundreds and hundreds of seals, sea lions and elephant seals every year, many of which are rescued from their satellite centers in Morro Bay and Monterey, as well as from independent rescue centers along the Pacific Coast.

But this year has been different.

“There are a lot of animals are being exposed to such high levels of domoic acid, that they’re dying on us. They’re not responding to treatment like they often have in the past,” Johnson said.

The Center has broken its animal admissions record this year, and the number of sea lions suffering from domoic acid has roughly doubled. But that number doesn’t include all of the sea lions that die before washing ashore, Johnson said. Nor does it account for all of the sea lion pups that will likely die without a parent. Many of the afflicted sea lions are lactating females still weaning their pups.