This fun blog features stories about ocean-hero kids, marine mammals, ways to save the ocean, and pages about the unique and weird creatures one might find in the ocean.  Visit.  Subscribe.  We promise  Neptune 911 For Kids to be fun, and educational.

By THE ASSOCIATED PRESS

Ringed seals, the main prey of polar bears, and bearded seals in the Arctic Ocean will be listed as threatened under the Endangered Species Act, the National Oceanic and Atmospheric Administration announced.

A species is threatened if it’s likely to become endangered within the foreseeable future throughout a significant portion of its range. 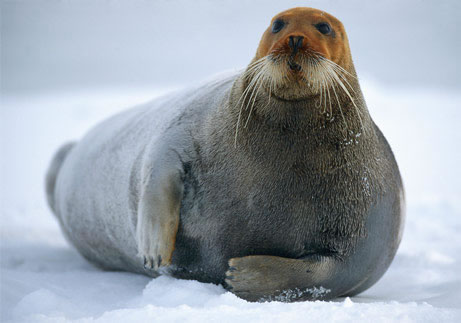 The listing of the seals came after federal scientists did an extensive review of scientific and commercial data. It has no effect on subsistence hunting by Alaska Natives.

“They concluded that a significant decrease in sea ice is probable later this century, and that these changes will likely cause these seal populations to decline,” said Jon Kurland, protected resources director for NOAA Fisheries’ Alaska region.

“The ESA was not enacted to protect healthy animal populations,” Parnell said. “Despite this fact, the NMFS continues the federal government’s misguided policy to list healthy species based mostly on speculated impacts from future climate change, adding additional regulatory burdens and costs upon the State of Alaska and its communities.”

Ringed seals are the only seals that thrive in completely ice-covered Arctic waters. They use stout claws to dig and maintain breathing holes.

When snow covers those holes, females excavate and make snow caves, where they give birth to pups that cannot survive in ice-cold water and are susceptible to freezing until they grow a blubber layer.

Decreased snowfall, or rain falling on lairs instead of snow, is a threat to seal survival, the agency said.

Bearded seals, named for their thick whiskers, give birth and rear pups on drifting pack ice over shallow water where prey such as crab is abundant. When females give birth, they need ice to last long enough in the spring and early summer to successfully reproduce and molt.

The listing is a major victory in efforts to save the animals because of the additional protections provided under the Endangered Species Act, said Shaye Wolf of the Center for Biological Diversity, who wrote the petition leading to the listing consideration.

“The seals need all the help that they can get,” she said by phone from San Francisco.

The development, however, is bittersweet, she said. While the Obama administration has acknowledged the threat, not enough is being done to limit greenhouse gas pollution behind the loss of sea ice, she said.

The NOAA Fisheries decision affects four subspecies of ringed seals around the world. Arctic Ocean seals off Alaska’s coast and seals on the Okhotsk and Baltic seas were listed as threatened. A subspecies in Lake Ladoga in northwest Russia was listed as endangered.

The listing covered two subspecies of bearded seals: the Beringia population, which includes Alaska, and bearded seals in the Sea of Okhotsk.

Designation of critical habitat for the seals will be considered later.

The agency said the listing decision will not mean any immediate restrictions on human activities.

It does mean that federal agencies that issue permits or pay for projects that might affect a threatened species must consult with NOAA Fisheries to make sure activities do not jeopardize the animals.

Like Loading...
‹ Plastic Art Defines the Plastic in Oceans
Unilever to End Use of “Plastic Micro Beads” ›