BlueVoice has learned from a highly reliable source that in 2008 there was a mass mortality event (MME) of melon-headed whales (a species of dolphin) on the coast of Madagascar. This source tells me there is suspicion that the cause of the MME was seismic testing that was being 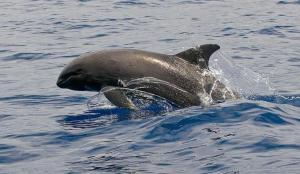 conducted in the area.

The government of Madagascar has refused access to scientists who wish to investigate. The fact that my source so far wishes to remain anonymous is not a surprise. Scientists do not like even educated speculation. They want all the data and then peer review before attaching their names. It is my responsibility to maintain his/her confidence so as to continue to be able gather information. The importance of this information is that it lends credence to the possibility that seismic exploration, which involves creation of very loud sounds underwater, can be plausibly linked to the mass mortality event in Peru.

Much evidence points to the cause of the MME being acoustical trauma leading to rapid ascent and decompression syndrome. No alternative hypothesis has been offered except by the Peruvian government which has attributed the deaths of at least 900 dolphins to “natural causes”, a patently absurd assertion.

BlueVoice is funding the return of the ORCA team, led by Dr. Carlos Yaipen Llanos, to the coast of northern Peru for further investigation into the hunting of dolphins for food and consequent health problems for those who consume dolphin meat.

Melon-headed whales, Peponocephala electra (Gray, 1846), are close in size to pygmy killer whales and the 2 species bear a strong resemblance from a distance. Adult males reach up to 2.7

m in length. Their maximum weight is about 225

kg. The melon-headed whale has a rounded somewhat triangular head when viewed from above or below. When viewed from the side the head appears rounded. Females and juveniles have an indistinct beak. They have a distinct dorsal fin located in the middle of their back. Their flippers are long and pointed at the tips, a characteristic that differs from the more rounded flippers of the pygmy killer whale. Melon-headed whales also have twice as many teeth as the pygmy killer whale; the upper jaws have 20-25 sharp-pointed teeth, and the lower jaws have about 22-24.

They are dark gray to black in color with white to light gray coloring on their ventral (under) side and, like the pygmy killer whale, white lips. The black triangular “mask” on the face distinguishes them from the more uniformly colored pygmy killer whales. Melon-headed whales also have a cape that dips much lower below the dorsal fin than that of pygmy killer whales, although its margin is often faint.