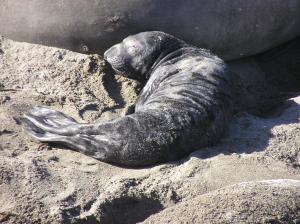 Several Sunday’s ago a young woman who volunteers with the local Marine Mammal Center in Morro Bay visited the Piedras Blancas Elephant Seal rookery were I volunteer as a docent. She mentioned that the Marine Mammal Center recently rescued a  northern elephant seal pup.  I thought that odd because this winter’s batch has yet to learn how to swim, much less hunt.  Usually, after the pups are weaned and have the beach pretty much to themselves in March, that’s when they learn  how to swim and hunt.  After that, it’s not unusual for a series of needed rescue operations. Read Elephant Seal Weaners in The Water for more about this phase of pinniped youngsters.

But sure enough, before  January 25, 2011, a young pup separated from its mother, managed to survive in the water, and washed up several miles south of the rookery–assuming this is where the pup was born.  (Northern elephant seals are born on land.)  But in all honesty, it would have been an extraordinary event for this pup to have survived such a scenario. I’ve witnessed many young pups wash out to sea during a storm surge.  They did not survive.

On a foggy Friday afternoon, animal care volunteers at the Center began the meticulous task of heating up a special mixture of salmon oil and milk matrix in order to tube feed the Center’s newest patient – an elephant seal pup named Second Day. “Does this temperature feel right to you, Ben?,” asked Ryah Smith. “Yep – just fine”, replied Ben. The two proceeded to the pen where Second Day was resting and got prepared to feed him his meal. During the feed, his shiny black coat glistened periodically when an occasional ray of sunshine poked through the layer of fog in the Marin Headlands. Just days earlier on January 25, 2011, volunteers from the Center’s San Luis Obispo operations rescued the nearly 5-foot-long pup at a crowded beach in San Simeon. He was alone with no mother in sight, malnourished and had an abrasion just under his chin.

Volunteers carefully tube-feed Second Day a nutritious meal of salmon oil and milk matrix.
Soon, he’ll grow stronger and will graduate to eating fish on his own.
© The Marine Mammal Center

For the next 5-to-6 weeks, he will be cared for by veterinarians and volunteers. During that time, he will shed the black coat he was born with (usually within 28 days of weaning), revealing a sleek and shiny gray one. Since he’s weak and unable to eat on his own right now (he’d still be relying on his mother’s milk if she were around), he’ll receive his nourishment from a tube until his natural instincts kick in and he begins to want to eat fish on his own. At 65lbs, he’s got quite the vocal chords and can be heard from the other side of the hospital. That’s a good sign of health, but veterinarians remain cautious optimistically about his recovery.

He is the Center’s first elephant seal rescue of the season, officially kicking off what is affectionately known as the “pupping season.”

Second Day, the first elephant seal pup in 2011, has been resting at the Center for a few weeks now. Pups this young are still usually nursing, but because he was orphaned, Second Day gets a special “fish milkshake” made from salmon oil and milk matrix four times a day. Eventually, as he grows older and stronger, he’ll graduate to eating whole fish instead.

Earlier this week, Waddeler, another elephant seal pup, arrived at the Center and began rooming with Second Day. Veterinarians noticed that since Second Day has gotten some company, he has begun to show encouraging signs of improving health. Second Day is increasingly interested in mealtime and is beginning to vocalize more and more.

One animal care volunteer had this to say about Second Day:  “…he loves lying in the sun with Waddeler and falling asleep after a feed, though gets very vocal when it’s dinner time again – you can hear him from almost anywhere at the Center!”

Because both of these pups are so very young, veterinary staff remain cautiously optimistic about their recovery.