Rediscovery of the Snubfin Dolphin in Papua New Guinea

9/17/09 Editor’s Note: A good deal of search terms are about the condition of California Sea Lions.  Click this link for the most recent update: https://neptune911.wordpress.com/california-sea-lions-experiencing-more-deaths/

From inside a deafening Twin Otter prop plane piloted by my Port Moresby Running Club friend, Captain Bruce Alabaster, I enjoyed the ride 8,000 feet above the southern coast of Papua New Guinea (PNG). It was 1999. I watched the mud flats, sand bars, mangroves, and sandy beaches pass below. Farther out to sea there were white-capped waves.  We were now flying west of the Purari River Delta where no road penetrates the tidelands.  Soooo beautiful!  There had been no signs of human disturbance since we left the intermediate stop-over town of Kerema more than 20 minutes ago.  Far below in the wet coastal lowland, numerous rivers meandered maze-like through raffia palm swamps.   Thankfully, I packed a huge supply of mosquito repellents. 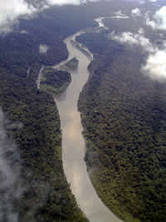 My assistant from the PNG National Museum, Jimmy Animiato, sat across the aisle and gazed out the window while sipping on refreshments provided by the steward who doubled as co-pilot for Milne Bay Airlines.  Jimmy cradled a hot paper cup of Red Rose Tea and chomped on a thick, hard Whopper biscuit, something akin to the standard fare hard-tack issued to the Army of Virginia in the Civil War, and popular in PNG even to this day.

After months of confinement in the Museum and Port Moresby, this was high adventure for Jimmy as much as for me. As Chief Curator and Head of the Department of Natural History, I planned to take every opportunity to further scientific discovery in a land where many new species of animals and plants were still being found at regular intervals.  When I requested funding to search for a rare river dolphin not reported in Papua New Guinea waters for decades, a regional director for a New York-based wildlife conservation society rejected my grant proposal noting: It’s like searching for the Loch Ness Monster…..blah, blah, blah….no we are not interested in funding you.

Fortunately, The World Wildlife Fund for Nature (WWF) and the Chevron Oil Company took my proposal seriously. They supported our small scientific team to explore the coast of Western Province in the vicinity of the Kikori River delta with the major goal of finding the rare snubfin dolphin at the northern end of its possible geographic range.

Bruce circled the Kikori airstrip and then performed a routine landing. When the props stopped, we disembarked the Otter into air as steamy as a scalding sauna.  At the side of the airstrip, WWF staff field biologist, Tanya Leary waited.  In 1999 the Kikori conservation area was a natural reserve and buffer area around the Chevron New Guinea oil fields and its Kikori River transport channel.

A quick motor-tour of Kikori Town exposed a population of several dozen houses made of wood, topped with zinc corrugated roofing.   Commerce was limited trade stores that sold only the most basic goods.  I heeded Tanya’s previous suggestion– Pack plenty of condiments to spice up your daily rice.  Our imported condiments saved us from the boredom of rice on rice meals at the Chevron camp.

From Kikori, we traveled upriver by motor launch to the Chevron compound at Kopi. 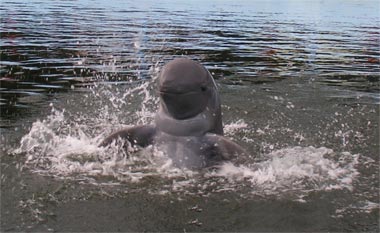 Together with Tanya and Jimmy, I would be searching for one of the least known dolphins in the world.  The snubfin dolphin, today known to science as Orcaella heinsohni, is only eight-feet long from its blunt snout to its flukes. As recent as 2005, it was named as a distinct species by an Australian marine biologist, Isabel Beasley.  Snubfins previously were lumped together with the Irrawaddy Dolphin as Orcaella brevirostris. (See Beasley et al. Marine Mammal Science Volume 21, pages 365–400, 2005).  Beasley was a perceptive scientist, at the right place at the correct time to garner the rare honor of naming a new dolphin. Her DNA studies on snubfins occurring in waters across the shallow Torres Strait from PNG confirmed that snubfins in nearby Northern Australia were a species apart from their close cousins living several thousand miles to the west in the rivers and coastal deltas of peninsular Malaysia.

Snubfin dolphins in PNG lived in areas so remote from westerners and trained scientists that it was over 40 years since they had been seen by the only person to report them in a published scientific work.  Records of this animal from the other side of the border along the southern coast of the Indonesian province of Irian Jaya[1] were even older and somewhat dubious because eyewitness accounts were limited to reports from sea captains along the Asmat Coast.  In fact, no bones or other physical material existed in any museum to provide hard documentation that snubfins occurred in PNG.  If we could not find a dolphin carcass or bleached bones, our team at least hoped to obtain photographs and precise GPS positions of the snubfin.

During our 1999 Kikori River expedition, Tanya, Jimmy and I believed we were searching for Orcaella brevirostris, the Irrawaddy dolphin.  Beasley still had not conducted her research.  At that time we operated under the false belief that lumped snubfin and Irrawaddy dolphins as one species despite the huge deep water ocean gap separating these exclusively coastal and freshwater species.  Today we realize that the Irrawaddy dolphin as the sister species of the snubfin is limited to a distribution from peninsular Malaysia to the Bay of Bengal in India.

It’s All In The Planning

We traveled under blue skies, everyone clustering under the canvas canopy in an open motor-boat headed upriver to a landing dock at Kopi. Here we transferred to a four-wheel drive double cab pick-up truck (called a ute as an abbreviation for utility vehicle by New Guineans and Australians) and headed up a well groomed road maintained by Chevron to the company staff compound.  Most of the technical staff of engineers, geologists, oil riggers, and helicopter pilots living at the compound spent two weeks on duty, followed by two weeks off-duty in Cairns, Australia. We were warned that our bags would be thoroughly inspected by a security team going into camp as alcohol and drugs were strictly taboo.  It was totally “dry” in the camp as far as alcohol was concerned.  The good news was that our assigned rooms were air-conditioned, had hot showers, and satellite TV.  Also the cafeteria served all you can eat buffet meals.

WWF had a couple of small rooms serving as office space in the compound.        After dinner we poured over contour maps of our intended search area and marked out a zigzag flight route that we would recommend to our helicopter pilot in the morning.  Chevron picked up all costs for the flight time and provided a piloted four-seat chopper. We had access to the chopper as long as no high priority oil company missions or emergencies developed, and provided the weather was acceptable.

With two consecutive morning scheduled flights, we planned the most efficient search route. Thereafter, we were limited to small surface boats to continue our snubfin search.

I was psyched with anticipation. This was my first aerial survey for a marine mammal. The largest river in the region, the Fly River, although formerly providing potentially dolphin friendly habitat in past years, was now polluted by gold and copper mining tailings and garbage to the point it was considered a “dead” river.  Could we rediscover an animal that many people doubted existed any longer in Papua New Guinea?  Snubfin dolphins require large, flowing rivers and river mouths for the bottom fish in its diet.  The correct conditions within the likely geographic range of the dolphin in all of Papua New Guinea were only present in this general coastal region of Gulf and Western Province in the southwest corner of PNG.   I watched TV and read a book but my anticipation was stoked so high that it was well past midnight before I could drift off to sleep.

End of Part 1 — Coming in Part 2.   The Aerial Search for the Snubfin Dolphin.

[1] Irian Jaya is known as West Papua by local people of New Guinea origin. New Guinea peoples generally oppose a repressive regime imposed by Indonesia. Indonesia took possession of the western half of New Guinea when a power resulted first by the collapse of the Japanese occupation in the late stages of World War II and then by the failed attempt at re-establishing its former colonial empire in the area by the Dutch.