From: The Toronto Sun 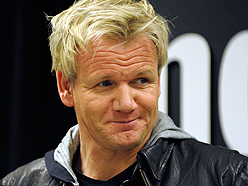 Celebrity chef Gordon Ramsay was doused in gasoline and held at gunpoint as he tried to uncover the dark world of illegal shark fin trading for a new TV show.

The Hell’s Kitchen star was shooting scenes for a British program Big Fish Fight when he confronted gangsters in Costa Rica who had slaughtered thousands of sharks to sell their sought-after fins.

But Ramsay was left terrified when the gang kept their guns trained on him and his TV crew before throwing fuel over him. He was later advised by local police to flee the country for his own safety.

The chef tells Britain’s Daily Mail, “It’s a multibillion-dollar industry, completely unregulated. We traced some of the biggest culprits to Costa Rica. These gangs operate from places like forts, with barbed-wire and gun towers.

“At one, I managed to shake off the people keeping us away, ran up some stairs to a rooftop and looked down to see thousands of fins, drying on rooftops for as far as the eye could see. When I got back downstairs, they tipped a barrel of petrol over me.

“Back at the wharf, there were people pointing rifles at us to stop us filming. A van pulled up and these seedy characters made us stand against a wall. The police came and advised us to leave the country. They said, ’If you set one foot in there, they’ll shoot you.’”

What is Shark Finning?

” Finning is the inhumane practice of hacking off the shark’s fins and throwing its still living body back into the sea. The sharks either starve to death, are eaten alive by other fish, or drown (if they are not in constant movement their gills cannot extract oxygen from the water). Shark fins are being “harvested” in ever greater numbers to feed the growing demand for shark fin soup, an Asian “delicacy”.