Home › Condition of Oceans › Oceans Are Important To Kansas, Toto

Oceans Are Important To Kansas, Toto

While in Santa Fe, my son-in-law handed me a news article “Oceans Are a Treasured Resource,” and said that this is really a big issue for coastal dwellers.  I said, no, it is just as important to inlanders as it is to coastal folks.  I challenged blog partner, Frank Bonaccorso to giving the scientific reasons.  His piece follows.  And the article in The Santa Fe New Mexican by Gregg Bemis, was another way of looking at how ocean health is a matter for inlanders as much as for beach dwellers.   Bemis’s article follows.

My blogging soul mate, Charmaine, recently challenged me as a scientist to find a way to make people from the heartland of America understand why they should join all the people who live in states with an oceanic coastline to help protect our oceans.

I considered various approaches to highly technical essays including mountains of high-brow scientific jargon to confuse the hell out of all those Colorado Rocky Mountain high dwellers.  Instead, I thought it would be better to just stay with rock solid logic and plain language that should convince a stoic Montanan just as well as a born to the earth agro-entrepreneur from central Nebraska.

Beg pardon all you other inland states, but I decided to appeal directly to the great citizens of the golden Kansas wheat fields as to why they should give a lot of worry to the increasingly sorry state of our global oceans.   So, here it is.

My Top 10 Reasons why the health of our planetary oceans are vital to Kansas:

1. The warm waters of the Florida Keys are only a plane ride away when January blizzards threaten.

2 . Sea salt is a healthy dietary supplement for goiter problems.

3. All those Kansas boys would not have the option of joining the  Navy to escape.

4. Even Toto likes salt water dog-paddling once in awhile.

5. Where ya going to get your calamari rings?

6. Got to have some place to float the USS Wichita?

7.  There will be 65 people out of work in the state when the three Red   Lobsters have to board up the windows.

8. We might have to mothball all the unusable cruise ships in your wheat fields!

10. I could only think of nine reasons – give me a break! 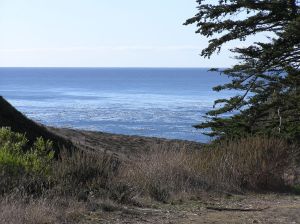 Oceans Are A Treasured Resource

This newspaper likes to use the word “adventurer” in its tag line for me, so for a change this week’s article will talk about a subject near and dear to my heart which involved a little adventure this past week. I realize that for most Santa Feans, the oceans are somewhat abstract. Having grown up on the East Coast and having spent the first 50 years of my life on, in, or under the water, oceans are important to me.

Actually they are important to all of us, and not just because they had a profound effect on our geography here in New Mexico. Today around the world, the oceans cover a substantial majority of the earth’s surface. The deepest spot is the Mariana trench in the pacific at 36,000-plus feet, significantly more than Mount Everest, which at 29,028 feet is 24 percent less of an aberration from sea level.

The oceans are a huge source of protein for many peoples of this world and are one of the major food sources on a par with overall agriculture. It is an interesting fact that after oil, fish is the next largest import category into the United States. This is particularly of concern when it is also recognized that stocks of fish are being severely depleted and in fact some 30 percent or more of major fisheries in the world have been effectively fished out.

Many scientists and technologists are attempting to address this problem from different points of view. Marine sanctuaries have been created in which all fishing is prohibited in an attempt to study and determine the speed and growth of fishing stocks if left alone. Organizations like Marine Applied Research & Exploration http://www.maregroup.org/, based in Northern California have been studying these sanctuaries for 5 years using remotely operated vehicles and other increasingly competent but expensive technologies.

A new tool involves the use of a two man high performance submarine, dubbed Super Falcon and developed by Graham Hawkes of Deep Flight, who is arguably the world’s most creative and versatile developer of underwater vehicles. My little adventure was the opportunity to spend three days training in the sub to be its pilot. The sub is fast, up to 6 knots, with high visibility domes for the pilot and technical observer, and is rated to 2,000 feet, deep enough to include most sea life.

It looks and acts more like an airplane than any sub ever built before and has the agility to swim with and monitor the sea life around it. Being battery driven and configured to operate with very little electrical by-product, marine life is not scared away, making examination thereof very effective. Many fisheries around the world provide good visibility for observations.

My three days of training in Monterey Bay were challenging because of particularly poor visibility. (The luck of the draw.) This was like learning to fly a plane buried in a cloud the whole time without the benefit of any reference points. Of course there was always the bottom, which I plowed into once, and the surface to which I could return, but in between, quite a challenge. This is not for anyone who has a tendency to be claustrophobic. The cockpit is confining in order to provide maximum efficiency in the water, but the pilot is too busy to think much about that. It is a huge challenge and an exhilarating, high-performance ride.

One of these days no doubt there will be many such subs doing this meaningful research into the lives and habits of food fish, and what can be done to enhance the productivity of the oceans. It is vitally important that we stop thinking of the ocean as a dumping ground for our trash and treat it with the same respect, research, and economic concern that has made agriculture such an important part of American productivity. Whether through aquaculture or just plain enlightened stewardship, the waters of the world are one more material resource that deserves our respect and protection.

Bemis is also chairman of Marine Applied Research and Exploration.

Like Loading...
‹ Chilean Sea Bass-Say No, No, No to Traitor Joe
Elephant Seal Faces Starvation From Fishing Lure & Hook ›