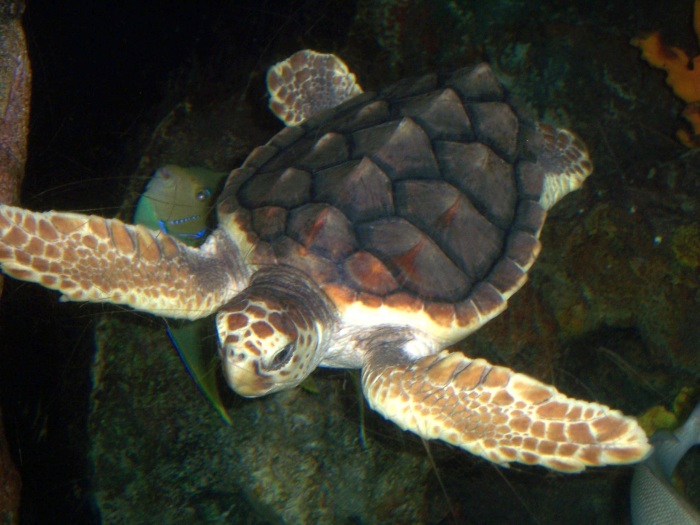 STUART, Fla. — South Florida beaches are no longer “Where the Boys Are.”

At least for sea turtles.

For more than a dozen years, the vast majority of sea turtles born on Florida beaches have been female, says Jeanette Wyneken, a biological sciences professor at Florida Atlantic University.

Not a single male loggerhead sea turtle hatchling was found at test beaches on the state’s Atlantic and Gulf coasts from 2015 through 2017, Wyneken said. And in the past 13 years, there have been seven years with no male loggerhead hatchlings.

“That’s alarming,” she said. “There was never a year with a majority of males. The closest was 2013, when we had 68 percent females.”

“I can’t say that our data represents what’s going on at 100 percent of Florida’s beaches,” Wyneken said, “but we’re looking for trends. And I feel confident those trends are going on at a lot of beaches.”

Wyneken doesn’t know how long female hatchlings have outnumbered males, “but we can assume it’s longer than we’ve been studying it.”

“Each year we don’t have male hatchlings has an impact,” she said. “The real problem will be if we have one, two or three decades with no males.”

If the sand gets hot, it’s all females

Wyneken, and other sea turtle experts, believe the predominance of female sea turtle hatchlings is linked to climate change.

“If a nest is really hot, say 88 degrees, it’s going to be all females,” Wyneken said.

At the other end of the spectrum, a 77-degree nest would be all males. An 84-degree nest will produce some males.

“In Florida, there are very few years where it’s cool enough to produce males,” Wyneken said.

It’s not just happening in Florida, either: About 99% of green sea turtles near adulthood and originating from the northern — and warmer —  part of the Great Barrier Reef were born female, according to a January study

Turtle nesting season begins in early March, and leatherbacks are the first to arrive. That could be why they have the highest percentage of males.

Loggerheads incubate during the hottest months of the year: June, July and August.

Sea turtles seem to be adapting a bit, laying eggs two to three weeks earlier than usual, Wyneken said, probably triggered by ocean water getting warmer earlier in the year.

Rain also has an effect. A hot, damp nest is more likely to have a few males than a hot, dry nest. So nests laid later in the summer when the rainy season kicks in have a better chance at including males.

But they’re also more likely to be impacted by tropical storms and hurricanes.

“If you have a nest with some males in it because of rain, and it gets wiped out in a hurricane,” Wyneken said, “the end result is no males.”

States up north are even worse

First: Florida produces the majority of sea turtles; and they’re creatures of habit, almost always returning to the areas where they were born.

Second: Have you been to the Georgia, South Carolina and North Carolina beaches in the summer?

“They’re just as hot, if not hotter, than Florida beaches,” Wyneken said.

In the first year of her study, “we found more males in Florida than on the beaches up north,” she said.

‘Looking under skirts’ of sea turtles

When Wyneken started studying sea turtle gender in 2002, she looked at nests throughout the southeast United States.

Because of funding cuts, she now focuses on beaches around Boca Raton on the Atlantic Coast and Sanibel Island on the Gulf Coast.

A nest typically has about 110 eggs, and Wyneken usually takes about 10 percent of the hatchlings from a test nest to study. They’re raised in a lab until palm-sized, anywhere from 3 to 7 months old, and big enough to determine the gender.

That’s done through laparoscopic surgery, making a small incision and “looking under skirts” with a camera, Wyneken said.

The turtles aren’t harmed in the process Wyneken developed.

“I didn’t get into biology to hurt sea turtles,” she said.

‘We’ve got to keep the world from getting hotter’

Climate change may also be affecting the number of hatchlings that scamper out of nests.

“We have noticed a decrease in the number of hatchlings that emerge from nests, probably because of the hot, dry sand,” said Niki Desjardin, senior scientist at Ecological Associates in Jensen Beach, which monitors sea turtle nests in sections of all three Treasure Coast counties.

Results for 2017 aren’t in yet, but Desjardin expects the rate rose to around 50 to 70 percent last year, when it was slightly cooler.

There is a little bit of good news: “At this time there are still enough males” to mate with females and maintain genetic diversity, Wyneken said.

Sea turtles take from 25 to 35 years to reach sexual maturity and be able to breed.

“But that’s just buying time, and not a lot of it,” she added.

“The big answer is a hard one,” Wyneken said. “Cut down on greenhouse gases that cause climate change. We’ve got to keep the world from getting hotter.”