“…reducing waste in those rivers would go a long way to tackling ocean plastic pollution.”

The equivalent of one garbage truck full of plastic waste is dumped into the world’s oceans every minute, equal to 8 million tons a year. New research suggests that 90 percent of that waste gets into the oceans through 10 major river systems.

“It seems that larger rivers preferentially transport plastic and these are rivers with a large population. You could reduce river plastic loads tremendously by focusing on these 10 rivers,” lead researcher Christian Schmidt of Germany’s Helmholtz Center for Environmental Research, told VOA.

Two of the rivers are in Africa – the Nile and the Niger – while the remaining eight are in Asia – the Ganges, Indus, Yellow, Yangtze, Haihe, Pearl, Mekong and Amur.

Researchers analyzed studies that examined the plastic pollution load in rivers, and compared the figures to the quantity of waste that is not disposed of properly in each river catchment or watershed. 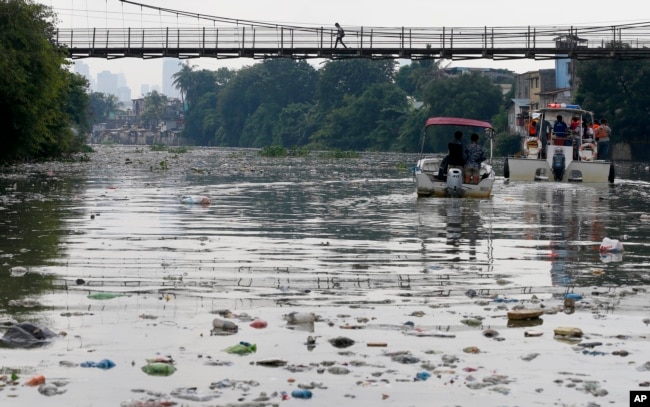 FILE – The Government’s Pasig River Rehabilitation Commission and environmentalists from Greenpeace survey the polluted Pasig River to track plastic waste to draw attention to the hazards of plastics and waste which clog rivers and tributaries in San Juan.

The results suggest reducing waste in those rivers would go a long way to tackling ocean plastic pollution. 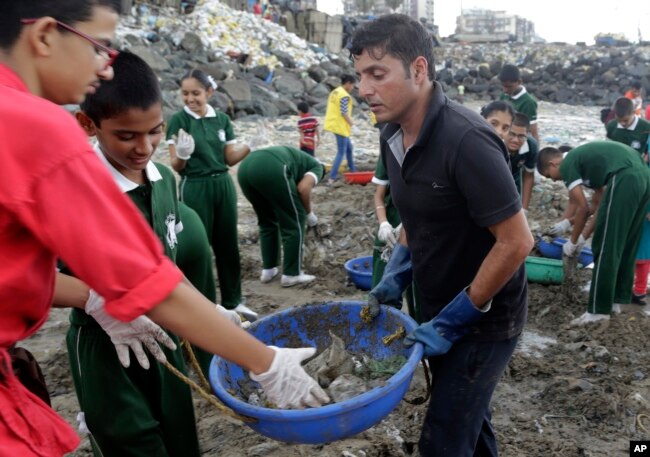 FILE – Afroz Shah, in black, participates in a clean up drive with school children at the Versova beach on the Arabian Sea coast in Mumbai, India.

The ecological consequences of oceanic plastic pollution are difficult to foresee, but scientists are clear that it is already deeply affecting marine life. So-called microplastics – found in cosmetics – are often mistaken for food. One recent study by the University of Ghent in Belgium calculated that humans eat up to 11,000 plastic fragments in their seafood each year.

“The microbeads, they might be more harmful for aquatic life, but the larger pieces, over time they are brittle and form a secondary source of microplastics,” according to Schmidt.

It is estimated that 5 percent of plastic is recycled effectively. Total global plastic production was 322 million tons in 2015, a figure that is expected to quadruple by 2050.

Schmidt and his colleagues hope their research offers a potential focus for cleanup programs.