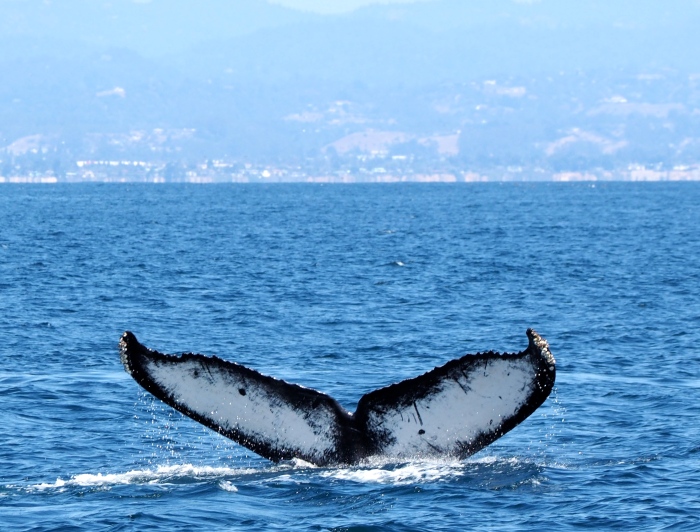 A crowdfunding project called Snotbot, which aims to fund quadcopter-enabled research of whales by collecting their projectile exhalations, has been getting a lot of attention.

… Since 2013, scientists from the Woods Hole Oceanographic Institution in Massachusetts and the National Oceanic and Atmospheric Administration have been using multi-copters to collect whale snot and high-resolution full-body images of endangered great whales.

After testing multiple iterations of drone hardware and software designs on expeditions off the shores of New Zealand, Chile, and New England, the team has arrived at their current flier of choice: a six-propeller multi-copter 32 inches in diameter, equipped to collect both images and breath samples from endangered humpback and right whales while the creatures are swimming at sea.

In a July expedition, the team successfully flew the hexacopter to gather full-body images of 36 humpback whales in New England’s Stellwagen Bank National Marine Sanctuary from 125 to 150 feet above the sea’s surface, as well as sinking to just 10 feet over the water to capture blow samples from 16 whales.

“I’m not saying collecting blow samples is novel; we’ve been doing it with various devices for the past 10 to 15 years, and with remote-controlled helicopters,” said marine biologist Michael J. Moore, the director of the marine mammal center at Woods Hole, adding that researchers have been doing high-resolution aerial photography of whales since at least the 1990s as well.

But having a single multi-copter that can do both over the course of one flight is a big step forward, because it will allow researchers to “build linkages between body condition and what ever else we can learn from the breath,” Moore said.

With the camera lens the team is using, he said, the researchers can calculate down to about two centimeters the width and the length of a whale and get a good idea of the animal’s body condition.

“An aerial vertical photo, done right, without a lot of reflection in the water and with the whale stretched out, gives you a great idea of how much body fat the whale is carrying, and whether it’s pregnant or not,” Moore said.

But even highly accurate measurements don’t explain why a whale is fat or thin, “unless there are signs of chronic entanglement” in fishing gear, Moore said, or scars from being struck by ships. So the team has been developing different methods for using the multi-copters to collect whale exhalations, which are called blow. “There are two [body fluids] we can get: the blow and the poop, and the blow is much more clinically valuable,” he said. “Respiratory disease is a big problem for whales, and blow contains concentrations of compounds that reflect what’s going on in the rest of the body.”

Consumer-grade unmanned aerial flyers—popularly called drones—have a lot of advantages over the older methods. “Planes are notoriously expensive to run,” Moore said, and “multi-copter platforms are a lot safer for the humans involved because you don’t need to be flying at low altitudes,” where the safety risks are higher.

They also seem to be unremarkable to wild whales, which may think of them as just another sort of seabird. “There’s been some skepticism from permitting agencies about this, but we have yet to see any evidence that we’re disturbing the animals, whether we’re flying at 10 feet or at 140 feet,” Moore said.

The team’s flying technique involves a pilot and copilot working together from the deck of a ship as whales swim nearby. “The beautiful thing is that we’ve never really had an opportunity to get such high-quality data without getting closer to the whale,” Moore said. “It’s an absolute delight to be able to do it without getting as close as other techniques would require.”

The team hopes to get permits to bring their ’copters to Antarctica in 2016 so they can gather data on humpback whales—a species they have already surveyed off the Pacific coast of Chile. “Our hypothesis is we should see a big difference in both the body condition and respiratory health of the animals, because they are in a much more pristine environment down there,” Moore said.

They also hope to do more surveys of right whales in the Atlantic this year and next, in Canadian, U.S., and Argentinian waters, gathering data that might contribute to saving this extremely rare species from extinction.

“I think it’s fair to say that there are substantive sublethal stresses on large whales, especially in the northern hemisphere, whether that be noise or entanglements or ship strikes,” Moore said. “The hope is that this work will enable us to get a better handle on those impacts.”