The Atlantic Ocean is teeming with life, but for the first time researchers have discovered dead zones in these waters — areas low in both oxygen and salinity — off the coast of Africa. Fish can’t survive in the dead zones, and researchers don’t yet fully understand how microorganisms will react.

This lack of a complete picture comes partially because the scientists stumbled upon this finding. Lead researcher Johannes Karstensen, of Germany’s GEOMAR Helmholtz Centre for Ocean Research Kiel, and several other scientists have studied this part of the world’s oceans for about a decade. Every couple of years, they retrieve and check their instrumentation.

“In 2010, when we recovered our instruments, we all of the sudden saw that the typically high oxygen was very low, nearly absent,” Karstensen told weather.com. “That really was remarkable for us. First we thought there was a problem with the censor, but we have another instrument a little deeper, about 100 meters, and that also recorded much lower values typically found in that range.”

Karstensen said it’s likely not the first time these Atlantic dead zones have shown up in data, but in all likelihood, other researchers wrote them off as inaccurate, an outlier, a measurement error because these areas are expected to have high oxygen levels. Only in the past decade or so, he added, have instruments produced high-enough quality data to get proper oxygen readings.

We’ve long known about dead zones in general. The best recognized is probably the one in the Gulf of Mexico. In 2014, it measured more than 5,000 square miles — huge, but down from the previous year’s 5,800 square miles, according to the Environmental Protection Agency. (This interactive from NOAA’s Gulf of Mexico Hypoxia Watch offers a pretty stunning timelapse.) In general, waters like this, called hypoxic if they drop below certain oxygen thresholds, tend to result in fish die-offs, especially if they interact with land. 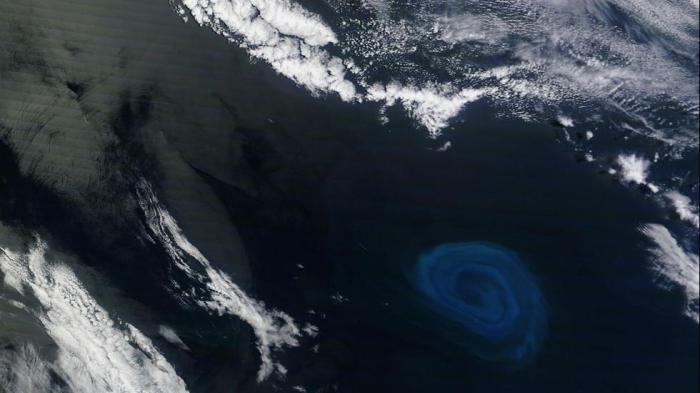 The recently discovered dead zones in the Atlantic form in eddies, similar to the one above, shown in blue in the bottom-right corner. (NASA Earth Observatory)

The Atlantic dead zones could potentially have this result if they move south and run into the Cape Verde islands, Karstensen said. The dead zones form in eddies, “large swirling masses of water that slowly move,” likely in sync with the Earth’s rotation. Weather there plays a role in that it doesn’t vary a great deal, with steady winds coming from the east, creating an environment “supportive” for these dead zones to form, according to Karstensen. At least that’s the current theory.

Next up, this research team plans to study specific eddies to better determine how these dead zones form. The scientists published their work Thursday, Apr. 20, 2015, in the journal Biogeosciences.

–From The Weather Channel