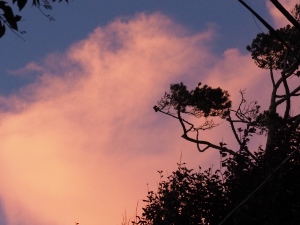 Some good may come from climate change after all. Dead zones, the most oxygen deprive portions of our world’s oceans, may actually be due for some shrinkage due to changing atmospheric patterns and water temperatures, according to a recently study.

The study, published in the journal Science, details how the oceans low-oxygen swaths of water are likely to shrink as climate change continues to weaken trade winds.

“The tropics should actually get better oxygenated as the climate warms up,” Curtis Deutsch, an expert in oceanography and the lead author of the study, said in a statement.

Dead zones often naturally occur due to the ocean’s current and chemical composition. Nitrogen, for instance, is known to bully out oxygen in some tropical Dead Zones, making them inhospitable for most ocean life. Natural dead zones have been seen all over the world, particularly in the fjords, deep ocean basins and near intense upwelling systems.

However, they can also be human made. Pollution seeping out of the Mississippi delta and into the Gulf of Mexico has been identified as one of the largest man-made dead zones, and continues to grow larger each year as a warmer climate encroaches on the Gulf.

So what makes Deutsch think things will improve?

“If we want to understand how biological and chemical aspects of the ocean will change in the future, we really have to pay a lot of attention to what happens with the winds,” Deutsch said. “The winds can lead to conclusions that are exactly the opposite of what you’d expect.”

According to his study, trade winds from the west are responsible for tropical upwelling systems, which deliver nutrients to oxygen-snatching bacteria in tropical waters already suffering from hypoxia. These create some of the world’s largest natural dead zones.

According to Deutsch, weaker winds mean smaller upwelling’s, and less food for these oxygen thieves.

The study detailing these findings was published in the journal Science on August 8.