On Wednesday, hundreds of miles of shoreline were designated as critical habitat to protect endangered loggerhead sea turtles. 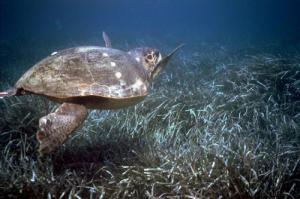 BY MONICA DISARE
MDISARE@MIAMIHERALD.COM
The federal government extended substantial protection to loggerhead sea turtles on Wednesday, designating hundreds of miles of coastline and ocean as critical habitat including beaches in Broward and Monroe counties.

The areas, which cover 685 miles of nesting beach and more than 300,000 square miles of ocean, mark the largest critical habitat distinction in history, said Amanda Keledjian, a marine scientist at Oceana, an ocean conservation organization. Keledjian has been working for years to secure this distinction and called it imperative to the recovery of loggerheads, which are listed as an endangered species.

In areas designated as critical habitat by the National Oceanic and Atmospheric Administration’s National Marine Fisheries Service and the U.S Fish and Wildlife Service, federal projects must be evaluated for potential harm to endangered species. Projects may include building highways, oil exploration or shipping, Keledjian said.

While the distinction is meaningful at the federal level, beachgoers are unlikely to notice any change. The new designation will not restrict beach access or interfere with existing projects, like those combating beach erosion, said Chuck Underwood, a public information officer with the U.S. Fish and Wildlife Service. USFWS announced the critical habitat designations alongside NOAA.

“The public won’t even notice it,” Underwood said.

Species with protected critical habitat are twice as likely to recover than species without protection, Keledijian said. The sea turtles will use their newly designated coastline and ocean space for nesting and feeding.

Some of the protected beaches are in Florida, including a stretch that runs from Fort Pierce to Broward and one along the southwest tip of Florida at Cape Sable. There are no new beaches designated as critical habitat in Miami-Dade. Rather, they dot the coasts of North Carolina, South Carolina, Georgia, Florida, Alabama and Mississippi.

Loggerhead sea turtles were named as an engendered species in 1978. Under the Endangered Species Act, critical habitat should be designated when a species is listed as endangered. According to Oceana, the regulations announced Wednesday come as a direct result of a lawsuit filed by conservation groups in 2013.

The new critical habitat account for almost half of the estimated 1,531 miles of shoreline used by loggerheads within the six protected states.

The loggerhead, a long-lived, slow-growing creature, is the most common sea turtle in the southeastern United States, nesting along the Atlantic coast of Florida, South Carolina, Georgia and North Carolina and along the Gulf Coast.