Editor’s note: We have underlined sections that highlight this story. 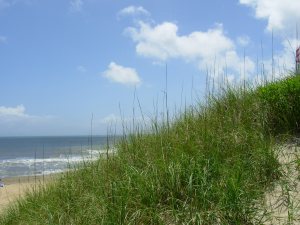 Slippersnails, olives, periwinkles, tulips – thousands of species of sea snails live in saltwater off the Lowcountry, uncounted millions of creatures.

If they all were wiped out by an ecological catastrophe it would take out the “base line” food of the marine food chain, the food eaten by foraging fish that in turn are eaten by larger fish. It would starve the ocean, the economies and the people who depend on it.
That’s not a dire prediction linked to climate change. It’s already starting to happen as the ocean gets more acidic. And for the Lowcountry, ocean acidification might not even be the real threat. It might be what scientists call the one-two punch of acidification and low oxygen in the estuaries, the nursery for the shellfish we eat – shrimp, oysters, clams.
Low oxygen kills marine life, too. That extra die-off feeds more acid into the water. The culprits for the massive loads of acid and low oxygen now found in the water are fossil fuel emissions, nutrients and other pollutants running off the land.

Oxygen-depleting pollutants can cause algal blooms such as the ones that killed fish along the Myrtle Beach shorelines in 2010 and are suspected of killing dolphins in Florida last year. They can create “dead zones,” areas in the water where fish and other marine organisms simply can’t survive.

“The bottom line is that the natural chemistry of our ocean, including the estuaries is changing,” said Paula Keener, a National Oceanic and Atmospheric Administration ocean acidification program marine biologist.

“It’s incredibly alarming. It’s so basic. It’s not an effect on a single species; it’s a whole ecosystem. The (consequences) are unknown,” said Sara Young, a Washington, D.C.-based marine scientist with Oceana, an international environmental advocate.

That’s why Congress made acidification study a national priority in 2009, and why the White House last week included it among environmental priorities to be addressed.

The ‘sink’
Ocean acidification is the big unknown, the X factor in climate warming study.

It is just what it sounds like: The water gets more acidic as carbon dioxide is absorbed and reacts with marine chemicals. As much as 25 percent of the compound released into the air as fossil fuel emissions drops to the ocean and dissolves – about 22 million tons per day, according to NOAA.

As recently as a decade ago, it was regarded as a relatively good thing: Oceans absorb carbon dioxide, acting as a natural “sink” to cut down the emission load in the air that’s been demonstrated to be exacerbating climate warming.

Then an oyster farmer on the West Coast noticed his crop weakening in more acidic waters. The alarms started going off. The “sink” supposed to be mitigating the warming turned into its “evil twin,” as researchers termed it. It’s one of any number of pollution effects that are cascading – making each other worse as they worsen.

The West Coast acidity is exacerbated by ocean upwelling, a phenomenon in which nutrient-rich bottom waters are driven to the surface. So few were studying the East Coast until a study found rising acidity in Chesapeake Bay waters killing oyster larvae – the second punch. Scientists began measuring acidity on this coast, where trouble showed up in a number of sites, including a long stretch from the Chesapeake past the Outer Banks in North Carolina.

“On the West Coast people are already feeling the pressure. On the East Coast we’re trying to study it. We’ve found some sensitive spots,” said Zhaohui ‘Aleck’ Wang, a marine chemist at Woods Hole Oceanographic Institution in Massachusetts.

Next week, scientists from NOAA and the Southeast Coastal Ocean Observing Regional Association will begin assessing what they do and don’t know is going on here, Keener said.

Tipping point
The scientists have their work cut out for them. Acidification is a complicated issue in the Southeast estuaries like the waters around Charleston.

Because the estuaries are relatively shallow and full of decomposing matter, they “are just loaded with CO2 naturally – they are factories (for it),” said Jim Morris, director of the Belle Baruch Institute for Marine and Coastal Studies in Georgetown.

In fact, coastal marine creatures have been demonstrated to be more adaptable to rapidly changing acidity levels than offshore creatures of the same species, because of the changeable estuary waters.

“Each ecosystem has its own tipping point (for problems with acidity),” said Young, of Oceana.

Few studies have been conducted here, but what gathered data there is suggests there’s no real effect on the creatures at this time, Morris said.

But it’s not as easy as that. Controlled, or laboratory, studies on shrimp in the Southeast have demonstrated that adding acidity to that load stunts them, Young said. More study is needed, the researchers each agree.

“We know acidification continues to rise. It will, one way or the other, affect the coastal estuaries,” Wang said.

“It all comes down to population growth increasing and the exploitation of resources along the coast,” said Jack DiTullio, College of Charleston oceanographer. “The bottom line is the oceans are in trouble right now, and we need to take some measures to mitigate the effects on our children.”

Like Loading...
‹ Legislation Introduced to Ban Use of Plastic Microbeads in Cosmetics
Underwater Gliders For Ocean Research ›