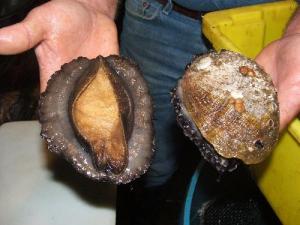 BODEGA BAY, Calif. (AP) — Marine biologists have determined that a type of toxin-producing phytoplankton not usually seen in Northern California is responsible for the deaths of tens of thousands of red abalone, mussels, sea urchins and starfish along the Sonoma and Mendocino County coasts three years ago.

The San Francisco Chronicle reports (http://bit.ly/1ljLXzv ) that the discovery comes as blooms of toxic algae have multiplied in the state’s coastal waters, threatening wildlife and increasing the risk of seafood-borne illnesses in humans.

But under certain conditions scientists are still working to understand, the plankton proliferate and start producing large amounts of a dangerous toxin that accumulates in the tissues of shellfish and can sicken people who consume the contaminated flesh, said Rogers-Bennett, who also is a research associate for UC Davis’ Bodega Marine Laboratory in Bodega Bay.

“One part of this organism’s life cycle is when it becomes a cyst, like a spore or seed that sits on the bottom,” she said. “When the environmental conditions become optimal — and we don’t know what those conditions are — these cysts can burst out of their little seed pods and come back to life. The worry is that when they bloom we get these giant red tides.”

Red abalone used to be plentiful in California, but decades of overfishing and occasional algae blooms have greatly reduced their numbers and led to fishing restrictions, as well as continued poaching.

The poisonous plankton did not surface during the last two years, but since so many abalone were lost in August 2011 and the slow-growing species has not been replenished, divers now are allowed to take only 18 mature abalone a year, six fewer than in earlier years.

Rogers-Bennett and other state scientists pinpointed Gonyaulax spinifera as the cause of the die-off by comparing the genes of abalone from before and after the event. They found changes in 30 genes that appeared to be part of a detoxification response.