Researcher’s Nightmare Fish Story: A Tale of Plastic in Fish

The diminutive Dr. Chelsea Rochman shared a big fish story. She reeled in tiny Japanese medaka (Oryzias latipes) for research, and landed big results–results that could change the way we consume and what we eat. She calls it “the invisible consequences of mistaking plastic for dinner.”

How does her research impact my seafood choices?  “It is a fact that hundreds of species have been found with plastic debris in their gut content…(the) plastic debris carries toxins such as BPA and flame-retardants (e.g. PBDEs)…and also sorbs chemical pollutants such a pesticides (e.g. DDT), industrial chemicals (e.g. PCBs), metals (e.g. lead) and petroleum combustion products (e.g. PAHs) from surrounding waters,” the postdoctoral scholar in the Aquatic Health Program, School of Veterinary medicine, University of California, Davis, explained.

So when taking home your fish and chips leftovers in a one-use plastic container, think about this:

1) What happens to that plastic container when you revisit your leftovers and toss the container into the trash or recycling bin?

2) How much of the degraded one-use plastic containers now filling ocean waters as microplastics thick with the above toxins, consumed via the food chain and likely in your fish, is now a part of you?

In other words, the concern is that for much of our planet’s population, seafood is a main protein source. For us in more affluent regions rich in seafood restaurants and products, we, too, are likely taking in with our fried cod or tuna sushi unintended BPAs, PBDEs, PCB and even DDT. And the food chain may be one reason why 9 out of 10 newborn baby umbilical cords analyzed in 2009 showed the hormone-disrupting chemical Bisphenol A (BPA), a plasticizer widely used in food and drink storage containers.

Let’s do a quick review of plastic debris in the ocean.

It was 1955 when Life Magazine declared American housewives relieved from extra work because “Throwaway Living” was here to stay. So just toss the 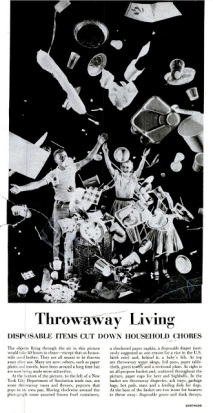 flower vase, sandwich bag, baby diaper, the popcorn popper, the dog dish, and that disgusting ash tray. Plastics were made to throw away. And did we ever. According to Paul Michel,  MBNMS Superintendent, “Our garbage is in every corner of every ocean.”

So? Here’s the problem. Plastics for our cups, containers, buckets, picnic gear, etc., are made from highly toxic chemicals. They don’t biodegrade, but break down into tiny pieces. The toxins remain. This is not news. The “Great Pacific Garbage Patch” is really old news. It and other “garbage patches” in every sea on the planet have been around for 30-50 years—giving older plastic wastes plenty of time to break down into tiny chips that look like food to fish.

Now, I’m planning a family barbecue featuring fresh caught tuna. Yum! Healthy, low fat protein. Unfortunately that tuna may still have high levels of BPAs and PCBs (for starters) in its system. It all began with ten lantern fish that ingested plastic debris floating in their fave plankton cafe. A couple of hungry squid dined on the 10 lantern fish. The tuna that I’m covering in a tasty chili rub, ate those two squid.

Back to Chelsea Rochman’s lab in San Diego. From her report noted above,  “Plastic debris litters aquatic habitats globally, the majority of which is microscopic (< 1 mm), and is ingested by a large range of species. Risks associated with such small fragments come from the material itself and from chemical pollutants that sorb to it from surrounding water. Hazards associated with the complex mixture of plastic and accumulated pollutants are largely unknown. Here, we show that fish, exposed to a mixture of polyethylene with chemical pollutants sorbed from the marine environment, bioaccumulate these chemical pollutants and suffer liver toxicity and pathology. Fish fed virgin polyethylene fragments also show signs of stress, although less severe than fish fed marine polyethylene fragments. We provide baseline information regarding the bioaccumulation of chemicals and associated health effects from plastic ingestion in fish and demonstrate that future assessments should consider the complex mixture of the plastic material and their associated chemical pollutants.”

That’s not a fish story.  That’s a nightmare.