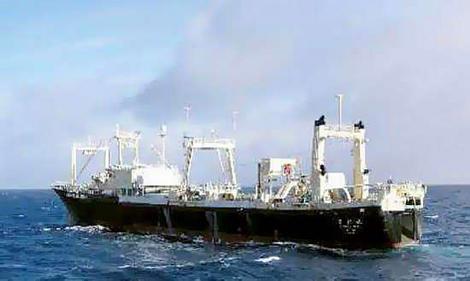 (Reuters) – Anti-whaling activists said on Monday they had captured images of Japanese ships killing protected whales inside an internationally recognized whale sanctuary, sparking criticism of the Australian government’s handling of the issue.

The aerial footage released by the Sea Shepherd Conservation Society appeared to show the bloodied remains of three minke whales on board the Japanese factory ship Nisshin Maru as it sailed in the Southern Ocean. The group said it had information that a fourth whale had also been killed.

The images have raised pressure on Environment Minister Greg Hunt, who has backed away from a promise made during Australia’s election campaign last year to send a ship to monitor Japanese whaling in the area.

His plan to instead send an aircraft staffed by customs officials to randomly swoop over the area has been dismissed by activists as ineffectual.

Bob Brown, a former lawmaker with the Greens party and chairman of Sea Shepherd Australia, called on the conservative Liberal Party-led government to honor its pledge to step up monitoring of the Japanese fleet.

“We’ve got a federal court ruling that this whaling is illegal and injunction to stop it,” he told reporters. “I don’t know of any other entity or person in Australia who could simply thumb its nose at the Australian Federal Court with an Australian government saying we won’t police it.”

Hunt’s office dismissed the criticism as political maneuvering, saying it would move ahead with its monitoring plan.

“The whalers have not yet been and are not currently in Australia’s search and rescue zone,” said a spokesman who declined to be identified, in line with government policy.

The opposition Labor Party, however, accused the government of misleading voters.

“People are entitled to say ‘why did they say one thing before the election and another after the election?’,” Labor lawmaker Anthony Albanese told reporters.

Australia and Japan have for years been at odds over whaling, which was once practiced by much of the world but is now carried out by only a handful of countries.

Japan catches and kills hundreds of whales in the Southern Ocean each year despite having agreed, under pressure from the United States, to an international moratorium on commercial whaling from 1986.

Japan says it is carrying out scientific research, allowed by a 1946 treaty, to establish whether whale stocks are recovering from over fishing.

Australia says that is a smokescreen for commercial whaling.

The two countries are awaiting the outcome of hearings on the matter held last year at the Hague-based International Court of Justice (ICJ).