The biggest volcano ever found on Earth—one of the biggest we know of in the solar system—has been hidden for ages. But now scientists have found it, just chillin’ beneath the sea. It’s a monster.

Tamu Massif sits on the floor of the Pacific off the east coast of Japan and occupies 119,000 square miles at its base, just slightly smaller than the entire state of New Mexico. And even though it doesn’t come close to the breaching the ocean’s surface, its peak is 2.2 miles high. That’s roughly five and a half times the size of Mount Everest. 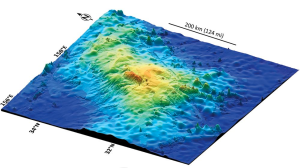 While Tamu Massif is a bit more squat than the the 12 mile-high Martian mammoth Olympus Mons—the largest known volcano in our solar system—its overall volume is only 25 percent less.

It’s hard for something that gargantuan to go unnoticed, and scientists had an idea that something was down there. But they assumed it was a giant system of multiple volcanoes until a research team at Texas A&M University discovered that it’s actually just one and had their findings published in Nature Geoscience. Oh and the name Tamu? That’s no mythic Kaiju; it’s just short for Texas A&M University.

Fortunately, Tamu Massif is probably long dead. The eruptions that helped it grow to its massive size happened 114 million years ago, and things have been quiet ever since. Hopefully things stay that way.

There could be other sleeping giants lurking out there too; the ocean is a big place. But until we find some other ancient colossus lurking in the depths, Tamu Massif is a pretty impressive reigning king. [Phys.Org]