Editor’s Note:  Seismic Testing is known to harm marine mammals.  Is it another trashing of the ocean’s or an essential tool to learn more about earthquake faulting and oil exploration?

What is Seismic Testing?

Following the news story by David Sneed, is an opinion piece by another community member.

Dozens of people Thursday testified both for and against plans by PG&E to conduct high-energy, three-dimensional 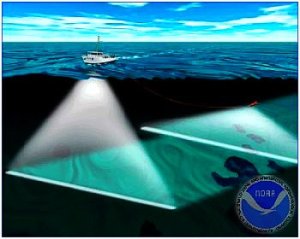 The State Lands Commission is the permitting agency for the project, and it has published an environmental impact report on the work. Thursday’s hearing was a chance for the public to tell the regulators what they thought of the study.

At the recommendation of a panel of state geologists, PG&E has modified its plans to conduct high-energy seismic surveys off Diablo Canyon nuclear power plant later this year. The new plans shift the emphasis of the surveys south to San Luis Obispo Bay where the regionally dominant Hosgri Fault intersects the newly discovered Shoreline Fault. The duration of the surveys could also be cut back, which may reduce effects of the work on marine life. The plan is under review by the state panel of scientists called the Independent Peer Review Panel, which includes county Supervisor Bruce Gibson, as well as the State Lands Commission, which is the permitting authority for the project.

On the faultline frontline for Diablo Canyon Today a research vessel will finish mapping more than four square miles of ocean floor off Avila Beach so geologists can better understand an earthquake fault near Diablo Canyon nuclear power plant. The marine research vessel Bluefin of Seattle has spent nearly most of December towing a sophisticated array of instruments in a grid pattern through the waters of San Luis Obispo Bay. The result will be a detailed map of the southern end of the Shoreline Fault, which runs northwest from the bay, brushing the coastline just off Diablo Canyon.

Viewpoint: Diablo seismic study is crucial to understanding risks For as long as it has existed, the issues surrounding Diablo Canyon nuclear power plant have been complex and the stakes have been high. The production of huge quantities of electrical power, with its enormous economic impact, brings with it difficult discussions on issues such as the handling of high-level nuclear waste and the safety of plant operations in a seismically-active region. We have long wrestled with the costs, benefits and risks of this powerful facility. In the devastating aftermath of the Fukushima earthquake and tsunami, our concerns about risk have been raised further. The unthinkable did occur in Japan: An earthquake and tsunami much larger than expected caused a nuclear disaster that will not be resolved in the foreseeable future. That event has reasonably caused us to re-examine the risks of nuclear power and its vulnerability to natural disaster. Assessments of earthquake threats to Diablo Canyon were under way well before the Fukushima event.

Pacific Gas and Electric has studied CA coastal panel OKs seismic plan for nuke plant Coastal regulators have approved a plan by a utility company to install seismic monitors in the Pacific off the Diablo Canyon nuclear power complex. Opinion on the studies was split between fishermen — both commercial and recreational — who are concerned about closures and damages to the marine ecosystem, and business owners and craftsmen who support the continued safe operation of Diablo Canyon.
The work could begin as early as September and could last until the end of the year. It will consist of a large research vessel sailing in a grid pattern over a large swath of ocean from Cambria to the Santa Maria River. 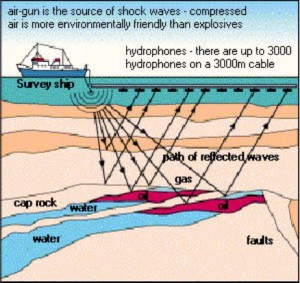 The ship will emit blasts of very loud noise into the ocean. Streamers four or five miles long will be towed behind the vessel, which will pick up the sound waves as they penetrate several miles into the Earth’s crust and reverberate back to the surface.

This will give seismologists a detailed picture of the earthquake faults offshore of the plant at the depths earthquakes occur. A clearer picture of the Hosgri, Shoreline and San Simeon faults is a prerequisite for PG&E renewing the plant’s two operating licenses to 2044 and 2045.
Fishermen are concerned about the loss of all or part of an entire fishing season. Vessels will not be allowed to operate in the areas where the survey work is being done.

It is also unclear what effect the very loud sounds will have on rockfish, a lucrative harvest for Central Coast fishers. The sounds could deafen the fish or disrupt their distribution.

Steve Moore, owner of Patriot Sportfishing in Port San Luis, said the seismic surveys scare him more than any of the dramatic cutbacks in fishing and other challenges that have happened over the past decade.
He said he is already beginning to lose customers due to the negative publicity the studies have generated. Many fishers recommended the agency require that PG&E do some test surveys to measure the impact on rockfish before the permits are issued.

Port San Luis fisherman Peter Nelson said the agency is rushing to judgment on the impacts of the surveys. He and others said the needs of PG&E should not be given priority over the health of the ocean resources.

“We don’t know if we can survive another economic impact,” said Lori French, a member of a multigenerational Morro Bay fishing family.
PG&E is working on plans to compensate fishermen for lost revenue and will hire some of their vessels as monitoring boats.

Counterbalancing these concerns were business people, chamber of commerce members and trade unionists employed at the plant who said the work is necessary to help plan for a catastrophic event similar to the earthquake and tsunami in Japan last year that crippled three reactors and caused massive radiation leaks.

Others said the business community is dependent on PG&E for the electrical power.

“PG&E is one of our vital partners providing clean and reliable power,” said Tim Williams with Digital West, a local high-tech company.
The State Lands Commission could make a decision on whether the project will be approved as early as July. The agency will provide written responses to all the comments it received Thursday. 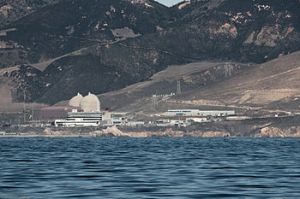 I urge fellow Cambrians to submit comments to the California State Land Commission in objection to PG&E’s proposed Central Coastal California Seismic Imaging Project. The goal of the project is to attempt to measure the three major earthquake fault-lines which run along our coast. The existence of these fault lines, especially after the continuing disaster at Fukushima, Japan, call into question the advisability of maintaining the Diablo Canyon nuclear power facility, operating near Avila. The proposed testing will do nothing to prevent an earthquake on any of these fault lines. The tests will instead produce a large amount of data about dangers that we cannot avoid when these earthquakes occur.
We should redirect the millions that will be spent on these seismic tests to help us move towards safe and sustainable sources of energy.

.Here is how the environmental impact report for the project describes it:
“The offshore component of the Project would consist of operating a geophysical survey 29 vessel, its associated survey equipment, and support/monitoring vessels . … The survey would be conducted along the central coast from approximately Cambria to Guadalupe (including marine protected areas around Cambria and elsewhere). … 18 active air guns … would discharge once every 15 to 20 seconds.”
In other words, huge underwater canons would blast ear-shattering sounds under the water in an area from Guadalupe to Marin County.

(These same measures are used to search for offshore oil reserves — coincidence?)
The environmental impact report indicates these tests would kill or injure marine mammals, including seals, dolphins, whales and otters. They could make them go deaf which would mean a lingering death. Already depleted fishing resources would be impacted. Seabirds would be affected as well, with little or no way of mitigating the impacts. Migratory birds would be affected as the tests would go on 24 hours a day and lights at night would be required. Air quality would be impacted and the project would contribute to climate change.

The ocean is our most precious resource. If the life of the ocean does not matter then neither do our lives. Some few persons stand to make lots of money from this outrageous project. PG&E will pass on the costs to us, the consumers. We and all life in the ocean and the land around us stand to lose. And for what?

The project will not prevent the next earthquake. And if it happens and Diablo crashes, so do we. Think of the economic impact of such a disaster. A recent issue of The Economist has on its front cover a statement that says the dream of nuclear power has become a nightmare. It is time to put our resources into safe energy and abandon nuclear power. Please write your comments against this outrage to: