From the Los Angeles Times 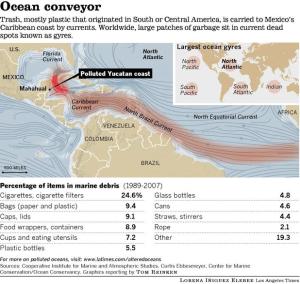 Just off a rutted dirt road, a beach as white as flour pops into view from behind a wall of sea grape and rustling palms. Pelicans slice over turquoise waters, and not a single person stirs the quiet.

The tableau, along a little-developed segment of Mexico’s Caribbean coast, is a beachgoer’s fantasy of unspoiled seaside splendor. Until you look down.

For as far as the eye can see, the sand glitters with bits of bright color: fragments of trash, thousands and thousands of them, strung like a vast, foul necklace.

The trashy scene is repeated for miles along this stretch of the southern Yucatan Peninsula, except in spots where the beach is tended by the owners of small hotels and oceanfront houses. Most of the refuse is plastic; many fragments are too small or faded to identify.

Finding garbage on the beach is hardly new to Mexico, or anywhere sea meets land. But this ecologically rich region of remote beaches, coral reef and mangrove forests — a world apart from the Cancun resort complexes 150 miles to the north — is especially cursed by seaborne rubbish that’s on the rise the world over.

The peninsula happens to sit along the path of regional currents that act like an aquatic conveyor, carrying a steady stream of plastic garbage from the Caribbean and Central and South America. Much of the flotsam washes ashore in and around Mahahual, a small but growing beach town about 40 miles north of the Belize border.

Mahahual’s trash woes are part of a much larger floating-junk crisis around the world’s oceans as the popularity of plastic containers has soared, including in many developing nations without proper disposal or recycling.

By some estimates, 46,000 pieces of plastic trash float in every square mile of ocean. Massive quantities of the waste, often tinier than salt grains, have created huge “garbage patches” in ocean gyres, giant dead spots formed by currents and winds that push trash toward the becalmed centers. One of those, the Eastern Garbage Patch, midway between Hawaii and California, is estimated to be twice the size of Texas.

Conservationists say the worsening onslaught threatens one of the few corners of maritime Mexico that remain largely untouched.

The area is home to the Banco Chinchorro, a large coral reef that is a diver’s paradise, and the Sian Ka’an Biosphere Reserve, a sprawling, government-protected zone populated by egrets, cormorants and other waterfowl. Tourism tends to be on a small scale, with the exception of cruise ships that pull up to a pier in Mahahual that was rebuilt in 2008, after Hurricane Dean.

“It has so much in terms of biodiversity. It’s the last bastion of the Caribbean, in terms of conservation” in Mexico, said Manolo Ruiz, sales director of a green-marketing firm in Mexico City called Sustenta.com, which has organized cleanups at Mahahual. “We really need to protect this place.”

Plastics pollution is so extensive that all the world’s oceans are touched by the waste, said Seattle oceanographer Curtis Ebbesmeyer, an expert on how currents push debris around Earth and author of “Flotsametrics and the Floating World.”

“It makes global warming seem easy,” Ebbesmeyer said. “The whole ocean is now infected with plastic. It’s impossible to get it out.”

Ebbesmeyer recalled traveling to Mahahual several years ago and collecting numerous washed-up plastic piggy banks and parts of Barbie dolls. Mahahual, thousands of miles from the nearest trash gyre, isn’t the victim of a garbage patch, he said, but rather appears to be a “collection spot” for refuse carried on local currents.

Some residents say most of the waste ending up in Mahahual appears to originate in Central and South America. But some has come from much farther away: Morocco, China, India.

Marcia Bales, a U.S. transplant who co-owns a small beach-side hotel a half-hour’s drive north of town, said that when she and her husband began building in 2001, the worst they faced was washed-up seaweed. Now they pick up six or seven large bags’ worth of plastic trash per week.

Two years ago, Bales recalled, she and guests went scrambling to collect a mass of seaborne trash that was 2 feet thick. “We all went out with garbage bags and in two hours had 30 bags of garbage,” she said.

The plastics on Mahahual’s picturesque beaches are more than an eyesore. They may threaten the fragile coral reef and mangrove ecosystems of the Yucatan Peninsula, said H. Bruce Rinker, an ecologist at the Maine-based Biodiversity Research Institute and science advisor to Sustenta.com.

“If we turn our backs, we risk harming the integrity of those systems,” Rinker said.

Next month, Sustenta.com is spearheading a cleanup in Mahahual that it hopes will draw 500 volunteers and boost longer-term plans to recycle plastics that wash ashore. Activists are also seeking money to build an environmental-educational center there that could include a workshop for turning trash into handicrafts and other projects to encourage green businesses.

Meantime, the best remedy may be to clean Mahahual’s beaches, bit by plastic bit. Then do it again.

“You can’t solve the whole thing,” said Bales, the hotelier. “You just have to tell yourself, I’m going to save a bird or a fish or a turtle. You can’t tell yourself any other thing.”