When a friend returned from her Hawaiian holiday she called me in near tears.  “We didn’t stay in a resort this time, where the beaches are always clean, so when I took a beachside walk and found mounds of trash just dumped on the beach and in  coves, it made me sick.”

So even our beautiful Hawaii demonstrates how much education is needed to keep locals from viewing the sea as a giant trash dump.  The following story about medical waste washed out from a landfill and  onto a Hawaiian beach demonstrates how easily our wastes foul our beaches and our seas.

The story that follows reports on how cruise ships still dump their waste in the ocean, and much closer to beaches and marinas than allowed.  CMC

One of the dirty secrets of ocean pollution is how much of the garbage and miscellaneous plastic crap that ends up there blows or seeps in from landfills. 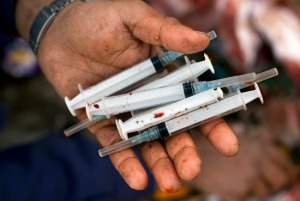 Some kids go to the beach to collect seashells.... (Photo: Jerry Lampen/Reuters)

Last week in Hawaii, rainstorms washed medical waste and other trash out of a hillside landfill’s holding pond, through storm drains and straight into the ocean. A few days later, the Waimanalo Gulch Landfill operators claimed the mess had been cleaned up, but workers were still plucking hypodermic needles, vials filled with blood and urine, and other hospital waste from the beach. One worker described vials “popping up like minnows” in the surf break.

Much of the garbage is no longer on the beach; it has been washed out to sea or caught up in the surf. Cleanup supervisors wonder about the chemical and biologic waste that was part of the landfill and has now been swept into the ocean, where it can never be extracted.

The mid-week storm dumped 11 inches of rain. “You’re talking an awful lot of water accumulating,” said the Ko Olina director of the local Department of Environmental Services, comparing it to a “tsunami” of water rushing off the slopes.

Waste Management—the giant, national garbage company that owns the landfill—and city officials blamed “mother nature” for the accident. The reality is that Waimanalo Gulch, like thousands of landfills across the U.S., is built right at water’s edge.

Signs have been posted at the beach to discourage swimming, and the landfill has been closed, for now.

The accident points to an endemic problem: Too often when we put our trash, even recyclables, on the curb to be picked up we think that’s the end of our debris. Out of sight, out of mind.

In fact, most of that garbage is headed to a new life, somewhere else, which may include contributing to the world’s largest garbage dump, the ocean.

You can view the environmental impacts of the cruise industry from a variety of angles.

From my perspective—and I’ve traveled on a wide variety of ships—those monster eyesores carrying multiple-thousands are little more than floating shopping malls packed with bargain hunters who rarely care much about the places they are motoring past.

Some of the smaller operations, carrying passengers in the hundreds, offer a pretty cool mode for people to see parts of the world they might not see otherwise, with minimal impact and a big gain of knowledge about the places visited.

But all of these ships far too often use the ocean like a giant toilet bowl. No matter the size of the boat nor the environmental message spread onboard, all ships leave in their wake food scraps, shredded paper and cardboard, ground-up plastic, various detritus blown off decks, sewage—treated and otherwise—and leakings of motor fuel and oil.

The Environmental Protection Agency (EPA) estimates that passengers aboard a typical cruise ship will, on an average day, generate 21,000 gallons of sewage, one ton of garbage, 170,000 gallons of wastewater from sinks, showers and laundry, more than 25 pounds of batteries, fluorescent lights, medical wastes and expired chemicals, up to 6,400 gallons of oily bilge water from engines, and four plastic bottles per passenger (which factors to about 8,500 on average aboard the Carnival Spirit, which can hold 2,124 guests, 1,000 crew, has 16 lounges and bars and carts about 900,000 tourists in and out of the port of Seattle and up the British Columbia and Alaska coastlines each year).

Cruise ships are supposed to dump sewage—“blobs of concentrated toxins from the bottom of waste-treatment facilities”—at least three miles from the coastline. Given the number of fines dished out in recent years, even that small request is clearly being ignored by many companies.

The good companies talk about using cleaner fuels, recycling more, boosting the efficiency of sewage and gray-water treatment systems. But it’s hard to judge just how much the ships are improving. Even the best onboard water-quality systems still allow high levels of ammonia, bacteria and other pollutants to escape with the mix into the ocean.

The regions most hard-hit by onshore dumping are the most popular stretches for cruisers: the coasts of Alaska and British Columbia, beaches throughout the Mediterranean, and increasingly, the coastline along the globe’s most popular route (because it’s furthest from potential terrorism and piracy)—the run from Rio de Janeiro around Cape Horn and up to Valparaiso, Chile.

Cruise companies get away with dumping both black water (waste from toilets and medical facilities) and gray water (from showers and sinks) far too close to shore due to the complexity of international, federal and local laws the companies choose to either follow or ignore. Borders on the ocean are hard to define; laws are very hard to enforce.

Most solid waste is burned onboard, and the incinerated ash falls into the sea. Plastic is often chipped, pulped or ground into tiny pieces and dumped overboard. The ships that carry solid waste back to shore hand it off to haulers on land, who may take it to landfills, or perhaps dump it straight into the sea themselves.

“The maritime business is the last under-regulated bastion of the corporate world,” Fred Felleman, Northwest consultant for Friends of the Earth, told Seattle’s InvestigateWest. “Because it falls between the borders of the world, it’s been hard to figure out how to get our arms around it.”

A new U.S. federal law would forbid ships of more than 300 tons from dumping treated or untreated sewage within three miles of California’s 1,624-mile coast, which would close a major loophole in state law; the law is expected to be enacted in 2011.

The EPA suggests the law would prevent 20 million gallons of sewage from swirling into the state’s coastal waters and improve the overall quality of California’s beaches.

While some of that pollution is attributable to runoff from shore, the EPA estimates that cruise ships spill more than 25 million gallons of sewage into California waters each year.

According to the cruise industry, most boats have been complying with the three-mile zone for the past five years; many even wait until they’re 12 miles offshore to dump treated waste into the ocean.

Out beyond three miles, few laws apply to most sewage. Most pollutants are not supposed to be dropped into the ocean until ships are 25 miles from the coast; discharge of oil or oily water into U.S. navigable waters cannot take place within 200 miles of shore.

The saddest aspect of this story, to me, is that dumping into the ocean is still legal, almost everywhere.

Shouldn’t all ships’ garbage and waste be cleaned and re-cleaned and cleaned again, and brought to shore where modern systems can dispose of and or recycle it? Shouldn’t that be the law, around the globe?