WASHINGTON — The world’s oceans may be vast and deep, but a decade-long count of marine animals finds sea life so interconnected that it seems to shrink the watery world.

An international effort to create a Census of Marine Life was completed Monday with maps and three books, increasing the number of counted and validated species to 201,206.

A decade ago the question of how many species are out there couldn’t be answered. It also could have led to a lot of arguments among scientists. Some species were counted several or even dozens of times, said Jesse Ausubel of the Alfred Sloan Foundation, the co-founder of the effort that involved 2,700 scientists.

The $650 million project got money and help from more than 600 groups, including various governments, private foundations, corporations, non-profits, universities, and even five high schools. The Sloan foundation is the founding sponsor, contributing $75 million.

But what scientists learned was more than a number or a count. It was a sense of how closely life connects from one place to another and one species to another, Ausubel said. 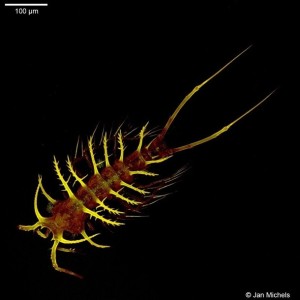 Take the bizarre and minuscule shrimp-like creature called Ceratonotus steiningeri. It has several spikes and claws and looks intimidating — if it weren’t a mere two-hundredths of an inch long. Five years ago this critter had never been seen before. No one knew of its existence.

Then, off the Atlantic coast of Africa as part of the census, it was found at a depth of more than three miles below the surface. It was one of 800 species found in that research trip, said discoverer Pedro Martinez Arbizu, a department head at the German Centre for Marine Biodiversity Research.

He was astonished to find that the tiny creature also was within the cataloging he’d made earlier 8,000 miles away in the central Pacific.

There was that critter again. Same shrimpy creature, different ocean.

“We were really very, very surprised about that,” Arbizu said in an interview. “We think this species has a very broad distribution area.”

In that way, Ceratonotus steiningeri exemplifies what the census found.

“We didn’t know so much about the deep sea…,” Arbizu said. “We believe now that the deep sea is more connected, also the different oceans, than we previously thought.”

The census also describes a species of strange large squid that was only recently found in waters more than 3,000 feet deep. The 23-foot-long squid has large fins with arms and tentacles that have elbow-like bends. Scientists had seen it in larvae form before, but not in its full-blown glory until it was filmed at depth.

The census also highlighted marine life that makes commutes that put a suburban worker’s daily grind to shame. Before the census started, the migration of the Pacific bluefin tuna had not been monitored much. But by tagging a 33-pound tuna, scientists found that it crossed the Pacific three times in just 600 days, according to Stanford University’s Barbara Block. A different species of tuna, the Atlantic bluefin, migrates about 3,700 miles between North America and Europe. Humpback whales do a nearly 5,000 mile north-south migration.

Still, that’s nothing compared to the sea bird that Ian Poiner of Australia studies. 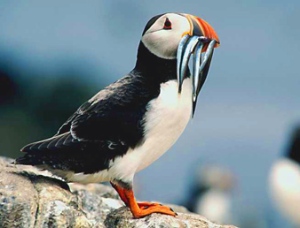 He studied puffins that make a nearly 40,000-mile circle every year from New Zealand to Japan, Russia, Alaska, Chile and back in what the census calls the “longest-ever electronically recorded migration.”

Other species, such as plankton and even seals, travel great lengths, but stay in the same part of the ocean. They travel thousands of feet 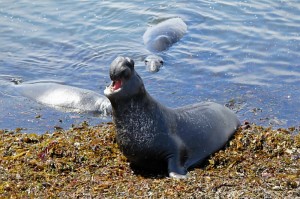 between the surface into the depths of the oceans. The scientists measured elephant seals that dived about 1.5 miles, Ausubel said.

The census found another more basic connection in the genetic blueprint of life. Just as chimps and humans share more than 95 percent of their DNA, the species of the oceans have most of their DNA in common, too. Among fish in general, the snippets of genetic code that scientists have analyzed suggest only about a 2 to 15 percent difference, said Dirk Steinke, lead scientist for marine barcoding at the University of Guelph in Canada.

“Although these are really old species of fish, there’s not much that separates them,” Steinke said.

Like Loading...
‹ A Flick of a Filter Feeds A Fish–Then Poisons It
Taiji, Japan Conservationists & Dolphin Hunters Ends Badly ›