Elephant Seal Weaners in the Water

This fun blog features stories about ocean-hero kids, marine mammals, ways to save the ocean, and pages about the unique and weird creatures one might find in the ocean.  Visit.  Subscribe.  We promise  Neptune 911 For Kids to be fun and educational. 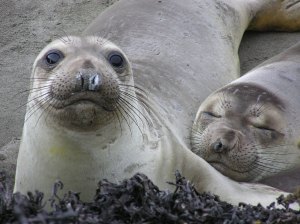 Birthing and breeding season is over at the Piedras Blancas elephant seal rookery, but there is new excitement on the beach – the weaners are in the water.  Pups are born from mid-December until early March, and their mothers nurse them for just 28 days.  During that time they grow from about 60 pounds to nearly 300 pounds, nourished by the very rich milk that reaches 50% in fat content.  (A few pups manage to nurse from more than one female and weigh as much as 500 or 600 pounds!)  The pups are weaned when their mothers need to head back to the ocean and their feeding grounds; elephant seals fast during the periods they are on land, living off their blubber, and females usually lose one third of their weight while nursing their pups.

When the mothers leave, the weaned pups, or weaners, are left on the beach.  They tend to group together with other weaners in pods, staying out of the way of the mothers that are still nursing pups and the big males patrolling the beach.  If they can, they stay close to the bluffs, safe from high tides.  Unlike most marine mammals that can swim soon after birth, elephant seal pups do not even go in the water until about two weeks after they are weaned.  First they must lose the black coats they were born with, replacing them with silver.  Then their fat must start converting into muscle, changing the awkward sausage-like weaners that can hardly move into miniature versions of their mothers.  The weaners sleep a lot as their bodies are changing.  They also play while learning adult behaviors – male weaners butt chests and female weaners fight over space.  And they are entertained by objects they find on the beach, spending hours fascinated by kelp or driftwood.

Finally it is time for the first trip into the water.  It is quite a sight – the weaners head to the shallows at low tide, yelping as they cross the rock shelf  on the north side of the parking lot.  The early ventures are short as well as noisy, but within a few days the weaners are spending more and more time in the water, playing in the shallows or just holding their heads under the water to experience the environment where they will spend most of their lives.  As time passes they go farther afield, perhaps traveling to the cove below the Piedras Blancas lighthouse, a favorite swimming hole, to practice their diving techniques.  Eventually, at about three and a half months of age, they head out to sea.

When humans first studied elephant seals, they thought the weaners didn’t travel very far in their first year at sea.  This was not an unreasonable hypothesis; some weaners occasionally come ashore at Piedras Blancas and beaches near other rookeries during the period the adults are at sea.  Weaners were not outfitted with satellite tags to track their travels until 2008, in part because only 40% of weaners survive to adulthood and satellite tags are expensive.  However, in 2008 researchers at U. C. Santa Cruz tagged five female weaners at the Ano Nuevo rookery above Santa Cruz before they headed out to sea. The tags were glued to the seals, and were programmed to report for three months.  One seal headed southwest, and the other four headed straight north.   Some of the tags reported longer than three months, and researchers were surprised to discover that at least two of the weaners made it to the Gulf of Alaska, one of them all the way to the Aleutian Islands.  That seal, now affectionately called “Banana” after her banana slug colored satellite tag (the banana slug is the mascot of U. C. Santa Cruz) was spotted several months after her tag stopped transmitting at the Farallone Islands outside of San Francisco; in early 2009 Banana showed up at Ano Nuevo, satellite tag still on her head.  Her maiden voyage was obviously a success, as she weighed in at 360 pounds at the age of one!

We have been able to increase our knowledge about these animals thanks to Tagging of Pacific Predators (TOPP), which began in 2000 as one of 17 projects of the Census of Marine Life, a 10-year 80-nation project to study life in the ocean.  NOAA’s Pacific Fisheries Ecosystems Lab, Stanford’s Hopkins Marine Lab, and U. C. Santa Cruz’s Long Marine Laboratory manage the program.  TOPP has attached satellite tags to 22 different species of predators in the Pacific including elephant seals, tagging well over 2000 individual animals.  Data from their tags is transmitted by Argos, a polar orbiting satellite that enables researchers to learn much more than was possible with less sophisticated satellites.  For example, it was not until Argos that we realized how deep adult elephant seals dive – early satellites could not track their almost 5000 foot dives.  Marine life has been tagged for many years, but only since the 1990’s has computer and satellite technology allowed remote access and increased data capability.  You can learn more about the TOPP project at TOPP.org.

On their maiden voyages, weaners don’t dive as deep as adults – 600 to 1800 feet is normal at the end of a weaner’s first journey, with dives lasting from ten to twenty minutes.  But they travel just as far as adults, and spend the same amount of time at sea.  Consider how astonishing it is for a pup nursed by her mother for a less than a month to learn to swim and dive on her own, then swim all the way to the Aleutian Islands and back, a round trip of five to six thousand miles, continuously diving for food.  For the rest of her life she will make that trip twice a year, returning to her home beach to give birth and breed for a month in the winter when she is sexually mature (as a juvenile she will come a month earlier to rest), and again for a month in the spring to molt.  Other than her two months on the beach, she will be diving 24 hours a day, seven days a week.  As an adult her normal dive will be 1,800 feet or deeper, where she will feed on squid and fish.  As she dives she will empty her lungs of air, utilizing the rich oxygen supply in her blood and muscle.  Her dives start with her tail fins; then she glides while descending, using her tail fins to return to the surface.  Time on the surface is brief, about two minutes – 90% of her time at sea is under water. She will travel alone, and her internal clock will tell her when to head back south to the beach.  What an impressive accomplishment!

Why don’t you come up to the bluffs at Piedras Blancas while the weaners are learning to swim, watch their antics, and help send them off on their amazing journey.