A new report from UCLA School of Law’s Emmett Center on Climate Change and the Environment and UCLA’s Institute of the Environment and Sustainability Plastic states, “Plastic litter is one of the most significant problems facing the world’s marine environments. Yet in the absence of a coordinated global strategy, an estimated 20 million tons of plastic litter enter the ocean each year.”

In the last decade that would equal about 200 million tons of plastic. Add another decade, and another, and another, and before we even considered the impact of plastic waste and viewed our oceans as convenient trash dumps, humans created a salty stairway to a plastisphere – an ecosystem that thrives on the large expanses of plastics in the oceans.  It is a microbe community of bacteria, algae and other single-celled organisms. Attracted to the plastic debris, these organisms colonize plastic and other objects floating in water. This is a natural behavior for anything floating in the sea.  But the skull and crossbones flag raises when we discover the toxic effect of this seemingly endless floating plastic mass—some of which may include your grandmother’s nylon stockings from World War II, or the first plastic bottles from 1947, to the explosive growth of HDPE (high density polyethylene) containers for retail product in the early 1960s.  Probably broken into tiny specks of microplastics, the plastisphere colony attracts toxic and deadly bacteria—including cholera-like bacteria.

Do you like your fish grilled or fried?  Either way, there’s a likely portion of consumed plastic in that finned meal.  Your meal probably gobbled some of the floating plastics thinking it easy game, or while it dined on something lower on the food chain, that unfortunate low-level creature surely added plastic to its diet.

Monterey Bay Aquarium reports, “Scientists estimate that around the world, up to one million seabirds and 100,000 marine mammals and sea turtles die each year from eating plastic.”

I lack the space here to list the plethora of marine mammals, seabirds, and endangered sea life that die or are entangled each year from floating plastics that are mostly the result of terra firm runoff from every continent on the planet.

Yes, I’m militant (to a point) about plastic in my home. Regardless of my efforts, a flotsam of HDPE containers, plastic bags and wrappers still land on my kitchen counters.  Most friends and family apologize when they bring plastic to the abode.  But that’s a good thing. It means that they have to think about it.  Even the good intent of saving my freezer goods during a recent long-term power outage resulted in plastic baggies filled with ice and stuffed into the freezer.  Now I look at that partially used box of plastic that will be used less than two times and may become part of the annual 20 million pounds of ocean-bound plastic when it escapes the trash container during a windstorm. 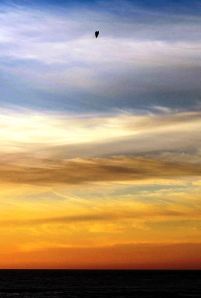 Floating balloon over the Pacific Ocean. Photo by Michele Sherman.

Recently,  a group of people gathered on a nearby ocean bluff.  They held hands and released a gaggle of red heart-shaped helium filled balloons that floated over the sea at sunset.  How romantic.  And how stupid.  Did they think these plastic balloons would float up to a heavenly cherub choir? Did they forget the basic principle of what goes up must come down?

Balloons take years to break down. According to the website, Balloons Blow, “(we found balloons) wrapped around a dead pelican’s beak, starving it to death, entangling a baby sea turtle, killing it before it even reached the water and a threat to any predator that dare tries to make use of the body… The balloons are mistaken for colorful foliage or take the shape of a jelly—a food source for many creatures.”

But let’s get back to the baggie and plastic wrap business.  I don’t wish to promote any single one company or product, but because I’ve purchased biocompostable product for zero waste events from Eco Products, I’m on their mailing list.  This morning I discovered that they now offer biocompostable fold top sandwich bags, resealable food storage bags and sandwich bags, and the product I miss most, cling wrap.

Let’s think about the amount of plastic in toys that we might buy this year.  What will be the product’s end? Will it help feed a fish?  Let’s remember to order our cuts of meat and deli product wrapped in butcher paper.  Let’s be sure to use personal stainless steel water containers.  Let’s find cosmetics and other products in glass, metal, or cardboard containers instead of plastic.  It’s not easy.  But every mindful move matters.

It may be too late to end the stairway to plastisphere in our oceans, but we can reduce the impact just one product at a time especially for those one-use plastic products.