A  boater discovered a 10-ft Risso dolphin swimming in Haverstraw Bay over the Memorial Day weekend.   According to NBC New York, officials said it is extraordinarily rare for  the dolphin to be found swimming that far north in the Hudson River.

Later found dead, a  forensic examination by a marine biologist with the Riverhead Foundation for Marine Research and Preservation found four plastic bags lodged in its stomach. One  bag measured 4 feet by 2 feet and was rolled into a large sphere, about 8 inches in diameter, the foundation reported. The other three bags were found intact.    Officials determined that the  600-pound dolphin died from starvation from blockage in its stomach.

Risso dolphins usually live off squid and throw up the beaks, but this dolphin had more than 100 squid beaks stuck in its stomach, according to another news report. 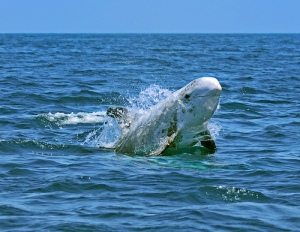 Risso’s dolphins, sometimes called “gray dolphins,” have a robust body with a narrow tailstock. These medium sized cetaceans can reach lengths of approximately 8.5-13 feet (2.6-4 m) and weigh 660-1,100 pounds (300-500 kg). Males and females are usually about the same size. They have a bulbous head with a vertical crease, and an indistinguishable beak. They have a tall, “falcate”, sickle-shaped dorsal fin located mid-way down the back.

Risso’s dolphins have a cosmopolitan distribution in oceans and seas throughout the world from latitudes 60°N to 60°S. In the Northern Hemisphere, their range includes the Gulf of Alaska, Gulf of Mexico, Newfoundland, Norway, Persian Gulf and Red Sea. They are known to inhabit the Mediterranean and Black Sea. In the Southern Hemisphere, their range includes Argentina, Australia, Chile, South Africa, and New Zealand. Little or nothing is known of their migration patterns or movements, but they may be affected by movements of spawning squid and oceanographic conditions.

Bycatch in fishing gear is the primary threat to Risso’s dolphins. Several types of fishing gear, including gillnets, longlines, and trawls, have been documented to incidentally “take” this species. Historically, large numbers of Risso’s dolphins were killed incidental to tuna purse seine fishing in the eastern tropical Pacific Ocean.

This species has been directly hunted for meat and oil in Indonesia, Japan (drive fishery), Caribbean (the Lesser Antilles), and the Solomon Islands. The populations in some of these areas where fisheries interactions and hunts occur may have declined in local abundance.

Small numbers of Risso’s dolphins have been captured from the wild for the purpose of public display in aquariums and oceanariums.