WHEN shipping was stopped in Canada’s Bay of Fundy following the September 11, 2001, terrorist attack on New York City, few could have predicted the positive impact it would have on the struggling population of northern right whales.

As shipping was stopped and the waters stilled along the Atlantic coast of North America, there was a dramatic shift in results of long-term testing of the region’s whales.

It was the first evidence that constant exposure to low-frequency ship noise may cause chronic stress in whales, with potentially devastating consequences for reproduction.

The findings have implications for all baleen whales, which communicate using low-frequency sound, including humpbacks, which pass though areas of heavy ship traffic.

And the results are of more than passing interest for whale researchers in Australia, where questions are being asked about the impact of the mining and oil boom on the once quiet world below the surface of the ocean.

Some conservation groups believe the problem is so great that shipping through the Great Barrier Reef should be restricted for two months of the year to make way for the humpback whale migration.

And as offshore exploration gathers pace, the pressure is on the federal Environment Department to toughen up on the conditions it imposes.

Some believe the issue is of enough concern for a parliamentary inquiry to be held into the impact of noise pollution on the marine environment.

Oil and gas companies are well aware of the issues involved and generally work within the approvals they receive. But in stark contrast to efforts to stop the controversial super trawler from operating in Australian waters because of concerns about dolphins and whales, federal Environment Minister Tony Burke has been less willing to intervene when it comes to underwater noise.

While technologies exist to limit the impact of underwater noise from shipping, pile driving and seismic exploration, the federal government is not always demanding that they be used.

Conservation groups argue Australia is well behind the rest of the world when it comes to managing ocean noise. But it is an issue that is of growing concern and not about to go away.

Ship movements through the Great Barrier Reef are forecast to increase sharply over the next decade as the massive Galilee Basin coalfields are brought into production.

Pile driving and dredging for port expansions, including Gladstone and Abbot Point, will blast the marine environment with sound pulses that have been shown by international studies to cause behavioural disturbances tens of kilometres away.

It is the same story in Western Australia, where resource developments are transforming the coastline and increasing rates of shipping. Singapore-based petroleum company Arcadia will soon begin seismic surveying in a known sperm whale feeding ground off Albany on the state’s south coast. 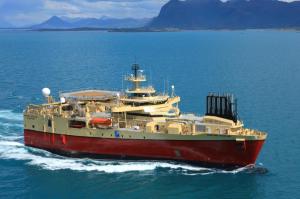 From next month, Arcadia will be using the 100m Norwegian seismic ship Ramform Sterling to sound-blast the ocean bed every 11 seconds at 229 decibels and trail 14 hydrophones on 8000m lines.

Woodside Petroleum’s environmental impact statement for its controversial James Price Point development acknowledges the impact of noise. It says its impact on whales can include “localised deviations in migratory patterns, displacement from foraging or resting areas, cessation or modification of vocal behaviour, and brief separation of females and offspring.”

According to Woodside’s environmental studies, however, most of the migrating whales will pass the proposed gas hub site at a safe distance of at least 8km.

But the project that threatens to bring the issue of underwater noise and whales to a head involves a junior oil and gas explorer in South Australia which is surveying the deepwater pools off the coast of Kangaroo Island.

The area is one of only three known Australian feeding areas for the endangered blue whale.

Within weeks, Bight Petroleum will seek permission to undertake seismic testing in the 2000m-deep Kangaroo Island Pools about 100km west of Kangaroo Island and 60km east of Eyre Peninsula.

Seismic surveys, used to locate oil and gas fields, involve a low-frequency, high-intensity sound pulse every few seconds, 24 hours a day, over one or two months. Sound pulses from the surveys are often detectable underwater for hundreds of kilometres.

Kangaroo Island Council has urged the federal government to “apply the highest level of scrutiny” to the company’s proposal.

“If approved, the highest level of risk management, monitoring and reporting should be mandatory,” the council says.

“Given the risk of significant impact to be borne by the Kangaroo Island community, the Environment Protection and Biodiversity Conservation Act 1999 referral should be assessed as a ‘controlled action’, with further robust, independent and transparent assessment required.”

Ironically, it is only because of oil and gas exploration that the link between the Kangaroo Island Pools and the blue whale is known.

A decade ago, Peter Gill, a researcher with Blue Whale Study Inc, an independent non-profit research body with links to Deakin University, was studying blue whales at the Bonney Upwelling.

“On the first fly we found 30 blue whales feeding,” Gill says. “Over the subsequent week we had a lot of blue whale sightings in that area.”

But when follow-up surveillance was undertaken in March the following year, there were no whales. Again in December 2004, none. But in December 2005 the waters off Kangaroo Island were alive again with blue whales.

“At some times the area is very significant and at other times it is insignificant,” Gill says. “The whales follow the krill swarms.

“They are not migrating; they are off the coast to feed.”

Blue whales found in Australian waters can grow to 24m and are listed as endangered, with no reliable estimate of their numbers.

Their larger relative the Arctic blue whale, which grows to 32m, is critically endangered, with a population still languishing at about 2000 more than four decades after commercial whaling ended, after cutting the blue whale population from 200,000.

From Australian waters, the blue whales swim either up the west coast to the Indonesian archipelago or up the east coast to the waters off Solomon Islands.

Unlike humpbacks, blue whales have to feed year round. The have long-range, low-frequency calls that they use to communicate the best feeding sites.

And for this reason they are considered extremely vulnerable to industrial noise.

Conservation groups say it is not only immediate physical harm that is of concern. The fear is that whales may be displaced from the best feeding areas.

And as the Bay of Fundy research showed, high stress can have dramatic long-term implications for whales.

Lead researcher Rosalind Rolland of the New England Aquarium in Boston says the study showed that noise stress could be a factor in the northern right whale’s slow recovery from commercial whaling.

No restrictions were put on the Santos exploration program for which Gill had been commissioned to do survey work.

And when the testing was conducted Gill said: “The truth is we found blue whales surprisingly close to the seismic site. But the fact they remained there does not mean they were happy about it.

“It probably reflects the fact there were no other krill swarms for many miles around.”

Like Santos, Bight petroleum has commissioned Gill’s team to conduct medium-term aerial surveys for blue whales in the exploration area. Gill said his company accepted the work on the basis that it would be free to speak publicly about whatever it found.

Bight’s chief operating officer, Iain MacDougall, says the company is chasing oil reservoirs of two billion barrels, big enough to rival the big fields of Bass Strait and the North Sea. The oil reservoirs are located in 1800m of water, with the oil trapped in rock more than 4km below the surface.

The company is planning to spend $35 million on seismic testing early next year and more than $100m on drilling wells in early 2015.

“We have timed our exploration program for when the whales will not be in the area,” he says. “We have got low-power, soft-start programs that give an opportunity for the whales to move away. The evidence is they are not bothered by the noise and don’t move away. There is a lot of emotion around this issue but the impact is minimal.”

But first, it must lodge an application with the federal Environment Department for approval for its planned exploration works.

The department can issue a go-ahead or approve the seismic program with conditions. MacDougall says the company expects to lodge its application soon. And while no noise restrictions have ever been placed on exploration work in the area, there is a heightened awareness of ocean noise within government.

When it comes to ocean noise, she says, Australia is a long way behind the rest of the world.

She says government should insist the latest technologies be used, such as smart buoys to alert ships when whales are around and bubble curtains to mask the underwater disturbance from pile driving. “The bottom line for all of this is we are never going to stop the development that is happening or the exploitation by the resource industry, but there really needs to be a parliamentary inquiry into what the impact of noise pollution on the marine environment is and how we can address it, because there is no legislation,” Arnold says.

“If these shipping developments go ahead on the east and west coasts, we could be putting the whole southern hemisphere population (of humpbacks) at risk. We won’t know if it has interfered with their communication and how much stress it is causing unless we start to do studies.

Arnold has little faith in the federal and Queensland governments’ strategic plan to protect the waters of the Great Barrier Reef.

“Maybe we have to say no shipping during the annual whale migration,” she says.

“Maybe there is six weeks of the year we have to cut the shipping right back.”

“From our point of view some areas are just too special to be opened up for oil and gas exploration,” he says. “That would include Kangaroo Island and the Bonney Upwelling, two of only three areas in Australia where the blue whale is known to feed.”