Editor’s Note 4/12/11:  I’ve made a  few corrections to  this story.  First, the e-seal is a male, and is about 700 pounds. Males migrate from the north and as far as the Aleutian Islands in Alaska.

A northern elephant seal male  who migrated from his Aleutian Island  feeding site, recently arrived and hauled out at the Piedras Blancas rookery.  He  may choke to death from our trash.

A Friends of the Elephant Seal docent discovered the approximate seven-foot, 700-pound male this week  on the beach with a green packing strap around her neck. The docent called  the Marine Mammal Center for rescue –but there’s a challenge.  Because the male is one of thousands of other molting northern elephant seals, it’s unsafe to attempt to cut the strangling strap from his neck.  He  must be isolated from other seals. This requires good luck, hope and patience.

Once again, our trash– and much of it plastic–which will not break down, threatens the well-being of another marine mammal by entanglement. 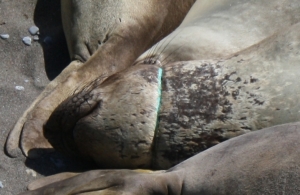 Fortunately, as I usually mention when I discuss this as a docent for Friends of the Elephant Seal at the Piedras Blancas rookery, there is always an elephant seal in the water–they don’t haul out at the same time.  Consequently, a small colony survived  on Guadalupe Island off of Baja California.  But unfortunately, the northern elephant seal population suffered a genetic bottleneck and today’s population is without genetic diversity.

Burney Le Boeuf, a professor emeritus of biology at UC Santa Cruz, told KQED Public Media in San Francisco “(Northern elephant seals) tend to do the same thing over and over again, and if that’s true, that means that as the ocean changes, they’re not necessarily going to be changing with it. We’re not sure that they have the ability to adapt to the changing environments…We know that elephant seals have a much more difficult time foraging when the weather is warm and they gain less weight…I would say that to the extent that global warming is making the oceans warmer, this could have serious implications for elephant seal foraging, as well as many other marine mammals because what it leads to is a redistribution of the prey.”

Warming ocean waters appear to already impact  another north-south migrating marine mammal, the California gray whale. Both their Arctic food source and increased orca predation may be a factor in the gray whale’s apparent population reduction. The same predation changes correlating with the change in ocean temperatures is another possible threat to the northern elephant seal, which already is a prime meal for the orca.  I make this statement because these changes in the oceans are likely human caused.

So will the northern elephant seal female with a green plastic wrapping strap survive?  If  Marine Mammal Center volunteers cut the plastic strapping away, he  probably will, but his future remains guarded.  The human mammal still remains his most dangerous foe.

For a behind the story look, read Christine’s blog:  Elephant Seals 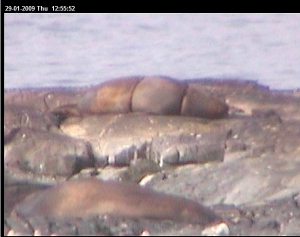