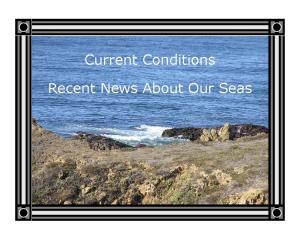 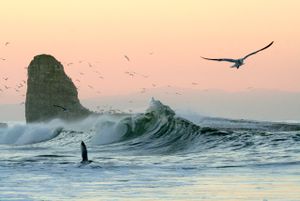 State wildlife regulators on Wednesday voted to establish new protected areas off the central and northern California coast where fishing would be banned or restricted.

The California Fish and Game Commission approved the second of five planned areas of California coastline in which marine reserves and parks will be created.

The approved zone stretches from Pigeon Point in San Mateo County to just north of the Point Arena in Mendocino County and includes 21 marine protected areas.

The protected areas — a mixture of reserves, marine parks and managed recreation areas covering about 155 square miles of sea — become official on Jan. 1, 2010. They cover waters up to three miles off the coast, beyond which lies ocean under federal jurisdiction.

About 11 percent of the total protected area will be completely closed to fishing, said Adrianna Shea, the commission’s deputy director. The hope is that by creating these underwater wildlife preserves where sea life can live unharmed, populations of groundfish like cod, abalone and crab will rebound.

The first cluster of marine protected areas was approved in 2007, scattered throughout an region covering about 200 square miles from Point Conception in Santa Barbara County to Pigeon Point.

California has 1,100 miles of coastline, and the area approved Wednesday is the second of five currently under study. Up next are plans for waters off the Southern California, the northernmost coasts and San Francisco Bay. It is all part of the state’s Marine Life Protection Act, which passed in 1999 to create these refuges to help struggling sea life rebound.

The plan was formed after a year of study by a 40-person committee of conservationists, fishermen, coastal residents and others who worked out a compromise to submit to the commission.

Some commercial fishing groups disagreed strongly with the plan, saying enough regulation currently exists on fisheries. The state’s commercial fisherman have been hit hard after two years of canceled Chinook salmon fishing seasons and other restrictions.

“It’s a fishy business that this expensive new program claims to protect the ocean, but in reality won’t even address water pollution, which we all know is a major issue,” Vern Goehring of the California Fisheries Coalition said in a statement.

However, environmental groups applauded the commission’s vote, pointing to studies of similar marine protected areas in Florida and elsewhere that have helped struggling fish populations recover.

“Each of us has a stake in the health of the ocean, and we have a responsibility to protect it,” said Samantha Murray of the Ocean Conservancy, who worked in the state’s study group.

“Studies show that marine protected areas allow fish and wildlife to grow larger, more abundant and healthier,” she said. “And that’s a win for everyone.”

“One, two, three…” With that pronouncement, Karl Mayer of the Sea Otter Research and Conservation (SORAC) program opens the door of a small dog kennel. A 45-pound southern sea otter, known only as 451, paws the air inquisitively, eyes the broad expanse of Elkhorn Slough, and executes a perfect dive into his new life.

Like many of SORAC’s otters, Otter 451 started life in a cataclysm. He was abandoned on a Santa Cruz county  beach in October 2008, and then brought to the Monterey Bay Aquarium at two weeks of age and seven pounds. There, for nine months, he was coddled, cared for, and occasionally chastised by an exhibit otter named Toola, serving as a surrogate mother.